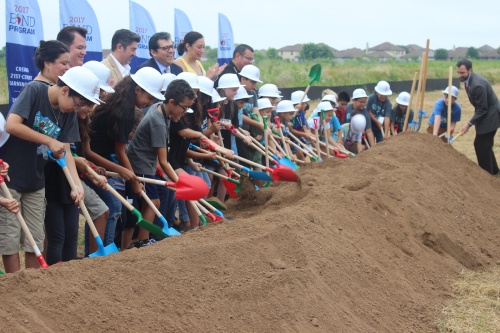 Located at a property adjacent to the current school, the new campus building when built will house students in fourth through sixth grade and give relief to the currently overcrowded campus, according to the district. The 2017 bond project is the first to expand the campus; many additional, not-yet-funded projects could convert Blazier to a pre-K through eighth grade campus in the future.

Leti Pena-Wilk, who has served as Blazier’s principal since 2011, said the school, originally built for about 550 students has faced overcrowding in recent years. With the school at times exceeding 1,000 students, the local community supports and knows the need for the new facility, she said.

“This is a very special moment for all of our school community, one we have waited for for a while,” Pena-Wilk said. “

She said the school and district have been hard at work since the 2017 bond was approved. Both have coordinated with the community to create the right new campus that will soon “offer sixth grade to Blazier Blue Jays” beginning in the 2020-21 school year.

Superintendent Paul Cruz thanked the community and the district’s board of trustees for passing the 2017 bond, which will open seven new schools or campuses by the 2020-21 school year. Trustees in attendance included President Geronimo Rodriguez, Jayme Mathias, Yasmin Wagner and Ann Teich.

The contractor for the project is American Constructors, while the project was designed by BLGY Architecture.