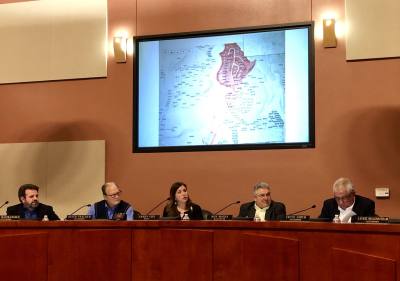 Travis County residents in the village of Briarcliff, Lakeway’s extraterritorial jurisdiction and a small section of Lakeway proper voted in a special election May 4 to fund advanced medical care in their area.

The approved proposal will create an emergency medical services overlay for the existing Emergency Services District 8.

The results of the election were declared at a May 21 meeting of the Travis County Commissioners Court.

Regarding the low turnout among Lakeway voters, Assistant County Attorney Barbara Wilson said, “It’s probably because it was a very, very small portion of the village and [extraterritorial jurisdiction] within the boundaries of the proposed ESD.”

The 54-square-mile area that will be serviced by ESD 16 is mostly without fire hydrants, ESD 8 President Debra Opdalh told Travis County commissioners at a Jan. 29 meeting.

As it stands, the city of Austin and Travis County are primarily responsible for advanced medical response with EMS Station No. 26, located at 22404 Hwy. 71.

“Explosive growth and traffic on Hwy. 71 are placing a tremendous strain on our resources,” Opdahl said.

Many residents in the area are over the age of 65, said Kyle Swarts, president of the Pedernales Professional Firefighters Association, at the same Jan. 29 meeting.

“We’re seeking to provide a higher level of care to our citizens,” Swarts said. “They require more advanced care than we currently are credentialed to provide.”

The new district will be authorized to assess homeowners up to $0.10 per $100 property valuation as a taxing entity.

“We are severely handicapped by funding deficiencies,” Swarts said. “An overlay district will allow us to provide the emergency room in the living room.”
SHARE THIS STORY

Commissioners voted unanimously to postpone any design or construction of new jail facilities for at least a year while staff re-evaluate the Travis County correctional system's needs.

Austin Proposition B enforcement shifts from education to warnings

Austin officials on June 15 provided an update on enforcement and outreach work by city staff and the Austin Police Department with the second phase of Proposition B camping ban enforcement now underway.

CesiumAstro recently announced its first mission to space, which will take place in September.

About 100 people showed up for the inaugural Run Through the Hive Police Memorial 5K. The race, which was held May 15 at the Hill Country Galleria, raised money for the Bee Cave Police Benevolent Foundation. The foundation offers financial aid and support to Bee Cave police officers, local public safety employees and their families during times of need. The foundation also offers a college scholarship to graduating Lake Travis High School students. (Greg Perliski/Community Impact Newspaper)

The recently expanded deck at the Lighthouse offers an outdoor bar and performance stage.