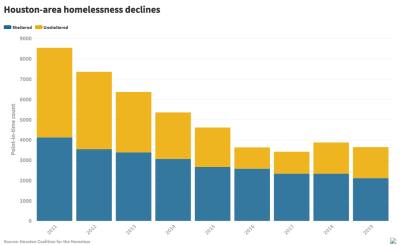 New data shows the number of people experiencing homelessness in Harris, Fort Bend and Montgomery counties dropped 5% year-over-year in 2019. Except for an uptick in 2018 following Hurricane Harvey, the count has decreased by 54% since 2011.

“Even though it shows a decrease of 5%, until we can transition all of the people on our streets to permanent or temporary supportive housing our work is not done, and we still have a lot, a lot of work to do,” Mayor Sylvester Turner said in a report to Houston City Council on May 15.

The Houston Coalition for the Homeless evaluates the area’s homeless population by conducting a point-in-time count, which is a method of collecting data by tallying people in shelters, in transitional housing and living unsheltered on a single night.