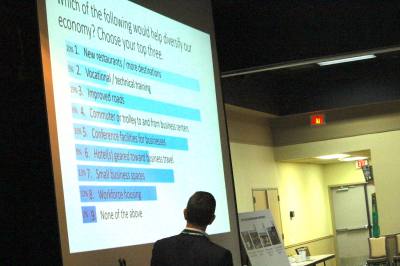 Results are shown of a real-time question posed at the comprehensive town hall event at the Lakeway Activity Center on May 16.

It was a high-tech, interactive affair for a town hall in Lakeway, and it was all designed to inform residents and boost citizen participation for a survey centered on the city’s comprehensive plan.

The May 16 Comprehensive Plan Town Hall held at the Lakeway Activity Center was led by Austin-based firm Design Workshop. It began with an interactive presentation, during which participants—more than 100 people attended—answered Lakeway-centric questions on a keypad from their chairs, centering on topics including the economy and traffic.

Just before the event began, Design Workshop Principal Claire Hempel said this is the first of two town hall events her firm will put on for the comprehensive plan effort.

“I think the technology that we’re using here tonight is really easy and fun and interactive,” she said. “We’ll be going through some questions in the presentation, then we’ll pause and ask people to use their keypad polling clickers to respond.”

As the presentation unfolded and presenters displayed questions to the audience on a huge projection screen, attendees answered questions and saw results within seconds.

After the presentation, attendees were encouraged to take the survey at one of several stations armed with iPads, and there were also more analog opportunities for citizen feedback in the form of maps and charts atop tables lined around the room. Attendees could place small stickers on map locations where they would like to see new transportation opportunities, for example.

“The comprehensive plan is going to guide the city in all of its future decisions regarding zoning, types of buildings, the types of amenities we want for our city," Lakeway City Council Member Louis Mastrangelo said. "So, the more citizens that would be involved in using those and can be involved [in the survey], the better. And I think this is a perfect example of that.”

The last comprehensive plan for Lakeway was completed in 2003, and this plan will set the city’s goals for the next 20 years. The survey, which closes to the public May 24, seeks input from residents on how they feel about everything from future land use to city growth.

There is no set time for the new comprehensive plan to be turned in to the city, according to Council Member Keith Trecker, but it should be mostly concluded by the end of the year.

Larry Harlan, Lakeway’s Comprehensive Plan Steering Committee chairperson, said his committee is still very much in the information gathering stage, and along with all of the other outreach they have done, feedback from the May 16 town hall will help guide staff.

“We’ve met with many previous leaders of the city; we’ve met with the chamber of commerce,” Harlan said. “This feedback though, will be [part of] the basis on which we will help design the vision for the city.”

Harlan has said he would like to boost those numbers for the comprehensive plan survey largely because this survey is so much broader than the first two.

To fill out the survey online, visit www.lakeway-tx.gov.
SHARE THIS STORY