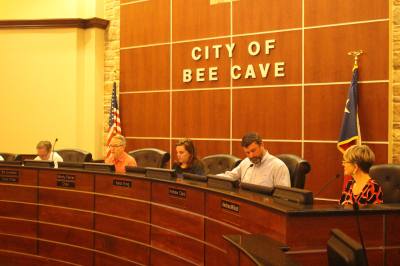 Bee Cave City Council approved amendments to a development plan for Signal Hill at the May 14 meeting.

It took two tries, but the Signal Hill subdivision was granted four proposed amendments to its development agreement at the May 14 Bee Cave City Council meeting.

The motion passed 5-1 with Council Member Kara King comprising the lone "no" vote.

The 94-acre development north of Hamilton Pool Road and west of Cueva Drive in Bee Cave saw its preliminary plat for 61 residences approved in October 2017 and its final plat and site plan approved in March.

Though the item was tabled six weeks ago, council agreed on the first two amendment proposals. The first proposal holds each lot in Signal Hill, rather than the entire subdivision, to a 40 percent maximum removal-without-replacement standard pertaining to trees, according to city documents.

The second proposed amendment clarifies that fences are allowed in water-quality buffer zones or drainage areas as long as they do not impede drainage flow.

The amendment that initially called for swimming pools built on lots within the subdivision to not be considered impervious cover was revised. The new language states that if a lot has an infiltration trench, the surface area of a swimming pool will not be deducted from that lot’s impervious cover.

The revised language pertaining to the rainwater-harvesting systems states a lot owner with one of those systems is eligible for an impervious cover increase equal to the lesser of 5% of the lot’s site area or 50% of the equivalent roof area.

Builders for the development said after the meeting that 17 of the 61 lots have sold so far, and a complete build-out of the neighborhood is predicted for spring 2022.
SHARE THIS STORY

Five Below is scheduled to open a new location in the Shops at the Galleria shopping center.

Beyond basic infrastructure, the city could bring an all-abilities play area to West Travis County.