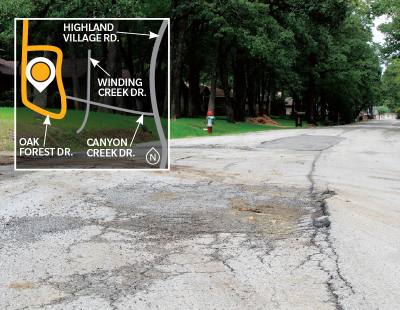 Voters approved a $7.15 million bond in November that will be used to reconstruct streets like Oak Forest Drive.

At the May 14 Highland Village City Council meeting, members approved a $523,000 bid to Pavecon Public Works LP for the first phase of the 2017 street bond program.

The street improvements earmarked for bond money include the reconstruction of 23 residential streets that were identified as failing or at the end of their life cycle. The streets will be reconstructed in four phases.

In July, it is anticipated that construction on Phase 2, which includes Oak Forest and Winding Creek, will begin.

Weather permitting, the goal is to have reconstruction of the 23 identified streets completed by summer 2020.
SHARE THIS STORY

Owning a restaurant is practically a family tradition for brothers Sam and Michael Billelo, who opened Fiori Italian Restaurant and Bar in Flower Mound in 2019.

The facility was scheduled to open in late May but was delayed due to a lifeguard shortage.

The new location will provide takeout service only.