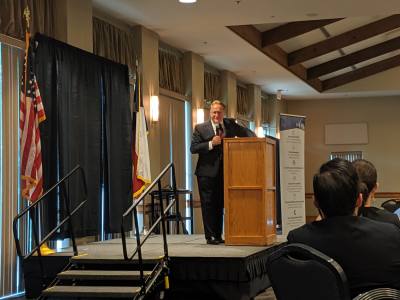 The Montgomery County judge gave the State of the County address May 9.

Montgomery County Judge Mark Keough gave the State of the County address May 9 at The Pulse luncheon, a Conroe/Lake Conroe Chamber of Commerce event at the Lone Star Convention Center.

Keough said the county is in the midst of its budget season and mentioned transportation projects and a possible upcoming road bond along with bills of interest in the Legislature. He said the county has added 140,000 residents since 2000 and is expecting to reach 600,000 in population by 2020.

"When you think about the uniqueness of the county, 82% of the population are living in unincorporated areas—146,000 residents rely solely on Montgomery County for their law enforcement, roads, bridges and essential services every day," Keough said. "Think about the influx of homes with economic growth—did you know 1,800 new residents a month move to Montgomery County and call it home? That's unbelievable."

He said Hwy. 380 used to be a decompressing drive for him through the woods—until one day, an elementary school popped up, and then a middle school.

"And lo and behold a sign—The Woodlands Hills," Keough said. "I talked to those guys ... 5,200 homes. It's unbelievable when you think about it."

He mentioned the school districts have high test scores and graduation rates, making the area desirable, but the area is also affected by rising property taxes.

He said although there is a 10% cap on residential property appraisal increases year over year, there is no constitutional cap for businesses.

"The appraisal district can raise your business [rates] to what they believe it is, based on what businesses sell, and that's OK," Keough said. "[But] it has increased so much you almost can't believe it: 60-70%, sometimes even more—there's no cap on that."

Keough went to Austin to fight to amend the bills.

"I stood on the house floor and argued for your business in the 85th session," Keough said. "It really came down to the last day. We argued for this position for the businesses to get a break, and at least put a cap on it. ... I apologize, we couldn't get it done. We couldn't get an amendment on the bill through the house."

Keough said he will take this into account during this summer's county budget sessions.

"Overall, if we could stay or decrease where we're at this year, it's a huge victory for us all," Keough said. "If the state isn't going to make any adjustments on how they tax property ... the only place we can find any opportunity at all is keeping our expenses low."

"We can't save a million dollars, but we can save a dollar a million times," Keough said.

As for transportation, Keough said one of the county's main challenges is keeping up with the growth in terms of roads and bridges, but projects such as Hwy. 249 and FM 1488, along with road widenings in The Woodlands, are all underway as planned.

"Our commissioners are working on studies for [their districts], so we're building some momentum toward some things," Keough said. "Once all [those studies] take place, I think there will be some road bonds."

He said the county will carefully look at every possible way to fund the development of roads.

"Statistics show us 30% of people there are just going through the area. We're looking at studies that have to do with alternate routes that would run parallel to [Hwy. 105 and I-45 along with other major roads], routes that would go all the way across the county," Keough said. "Once we have that study, we then are able to say, 'OK, this is what it's going to cost, and how are we going to go about getting the money?' I really can't say there isn't some form of bond in the future."

His plan to earn voter approval for a potential future road bond includes a number of town hall meetings, but Keough could not set a time frame for the bond.
SHARE THIS STORY

According to Atascocita Fire Department Chief Mike Mulligan, the move is part of a multiphase project that will include the build-out of temporary living quarters at the department's maintenance shop located at Rustic Timbers Drive and Will Clayton Parkway in Humble.

The fair is open to all qualified candidates who are encouraged to bring a resume, and registration is not required.