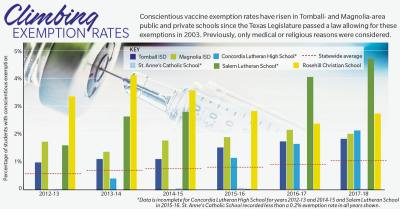 Conscientious vaccine exemption rates have risen in Tomball- and Magnolia-area public and private schools since the Texas Legislature passed a law allowing for these exemptions in 2003. Previously, only medical or religious reasons were considered.

Public health officials across the state said they are concerned about the rise in vaccine exemptions by “reason of conscience” as more parents each year opt their children out of otherwise mandatory vaccinations, which officials said may have contributed to the rise in measles cases in the Greater Houston area this year.

A growing number of parents in Tomball and Magnolia ISDs, as well as local private schools, have filed for vaccine exemptions since 2003, when state lawmakers made it legal for parents to seek exemptions for their children for reasons of conscience. Prior to 2003, only religious or medical reasons—such as diagnoses of autoimmune diseases, cancer, HIV or AIDS, and seizure disorders, according to CDC information—were considered.

Children enrolled in public and accredited private schools are required by state law to receive certain vaccinations—such as measles, mumps and rubella; tetanus; and polio—unless the parent submits a notarized affidavit for these exemptions, according to the DSHS.

“The idea is to make sure that schools don’t become somewhere that can harbor these kinds of infectious diseases that can be prevented through immunizations,” DSHS Media Relations Director Chris Van Deusen said.

As of April 5, the DSHS had confirmed 15 measles cases in Texas this year—five in Harris and Montgomery counties. This is the second-highest number of cases reported in Texas since the measles was eliminated from the U.S. in 2000, according to the Centers of Disease Control for Prevention data. Nationwide, the CDC confirmed 704 measles cases from Jan. 1-April 26.

While the DSHS does not yet recognize a significant statewide concern, Van Deusen said there is a concern for smaller parts of the state, such as individual school districts, counties or neighborhoods where the vaccine exemption rate is higher.

“The higher [the] rate of unimmunized people, the more likely it is that a disease can spread in that population,” he said. “The best way to prevent these diseases is to be immunized so not only you don’t get sick, but you’re protecting other people in the community who may not be able to be immunized for whatever reason.”

State data shows the percentage of students with conscientious vaccine exemptions at Tomball and Magnolia ISDs for the 2017-18 year ranks above the state average of 1.07%. This equates to about 285 and 234 students from each district, respectively, based on 2017-18 Texas Education Agency enrollment numbers.

TISD has the third-highest exemption rate for public school districts in Harris County, while MISD ranks fourth highest in Montgomery County, according to DSHS data.

TISD Director of Health Services Cathy Pool said she claims exemption numbers are not a concern for the district at this time, as the percentage encompasses the whole district rather than a single campus.

“We’re under where it would concern me [because of] herd immunity, so I feel that kind of protection,” she said. “An increase of 20 or 30 [unvaccinated] students isn’t a big thing for me when they’re spread out among the campuses we have.”

According to the CDC, the spread of an infectious disease is unlikely when a majority of individuals within a community are immune to the disease, which is called herd immunity.

MISD Director of Student Services Rob Stewart said despite the increase in exemptions, he also believes there is also not a concern for MISD.

“Usually as your enrollment grows, so do all of the other issues that come with growth. More kids mean more vaccination exemptions, but it also means more vaccinated kids, too,” Stewart said.

At local private schools, vaccine exemption rates are two to four times the state average. Salem Lutheran School and Concordia Lutheran High School have conscientious exemption rates of 4.84% and 2.12%, respectively, for the 2017-18 academic year, according to DSHS data. Rosehill Christian School recorded 2.46% of students exempt in 2017-18.

Salem Lutheran officials declined to comment, while Concordia Lutheran and Rosehill Christian schools could not be reached for comment despite multiple attempts.

The DSHS issued a health alert in February after seven measles cases were reported across the state—including the Greater Houston area—which is concerning for the department, Van Deusen said. Texas had nine confirmed cases of measles in 2018 and one in 2017.

Measles is a highly contagious respiratory illness spread through coughing and sneezing, Van Deusen said. He said 90% of people who come in contact with measles and are not immune will become infected; however, the vaccine is 97% effective after the recommended two doses.

“Immunization is such a simple thing for people to do to prevent getting these diseases. We don’t want to get back into the situation where we’re dealing with thousands of cases a year and seeing deaths from measles,” he said.

Although state law allows exemptions, the choice to vaccinate comes with responsibilities many people do not want to face, said Rekha Lakshmanan, director of advocacy and policy for The Immunization Partnership—a Katy-based nonprofit that educates the public about the importance of vaccination.

“With choice also comes the consequences, and I think that is the second part of this discussion that some people don’t want to acknowledge for face,” she said. “People want choice, but they don’t want to accept any consequences associated with that choice.”

Lakshmanan said the current trajectory threatens to undermine the concept of herd immunity.

“Research shows that nonmedical exemptions cluster geographically—in neighborhoods, in schools and other smaller groups,” she said. “These [rate] increases are happening in pockets, like the suburbs of Houston—Tomball, Magnolia, Cypress, The Woodlands and Katy—and that’s what we worry about.”

Because of the cluster effect, Lakshmanan said The Immunization Partnership has advocated for two state companion bills—Senate Bill 329 and House Bill 3551—which would require school districts to provide the DSHS with conscientious vaccine exemptions by campus as well as the district total and make the information available on the agency’s website, the bills read. The bills are pending in House and Senate committees as of press time April 30.

“Parents want to know all the risk factors when it comes to their kids, and that’s pretty standard across the board,” said state Sen. Kel Seliger, R-Amarillo, author of SB 329. “[SB 329] is all about more transparency, and I can’t think of a single situation where that’s a bad option to have.”

HB 1490—pending in committee as of press time April 30—would also stop the DSHS from maintaining a record of said exemptions, according to the bill.

The bill has received support from political action committee Texans for Vaccine Choice, said Jackie Schlegel, the group’s founder and executive director. She said TFVC’s mission is to protect and advance informed consent, medical privacy and vaccine choice for Texans.

Schlegel said she believes the choice to vaccinate is a fundamental issue beyond the actual vaccinations.

“It’s very, very dangerous when we start allowing the government to mandate any medical procedures ... and vaccines should be no exception,” Schlegel said.

However, Lakshmanan said exemptions for reasons of conscience increase the risk of vaccine-preventable diseases making a comeback in the U.S.

“There’s this compelling need to discuss vaccines from two different points of view, but time and time and again, researchers and scientists who have spent their careers studying the efficacy and safety of vaccines continuously come back with the same conclusions: The benefits of vaccination significantly outweigh the risks,” Lakshmanan said.
SHARE THIS STORY