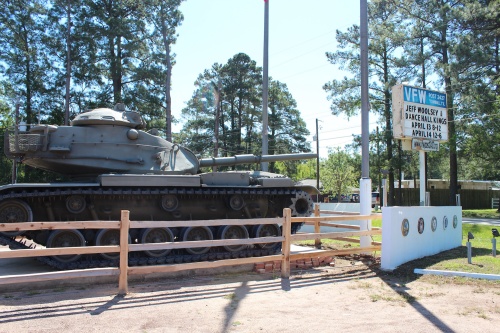 The veteran population in five Tomball and Magnolia area ZIP codes totaled 8,187 residents in 2017, according to data from the U.S. Census Bureau.

The Tomball-Magnolia community has seen a growing number of veterans move in over the last five years, despite declining veteran populations at the county, state and national levels from 2013-17, according to population estimates from the U.S. Census Bureau.

“Texas is a good place to be a veteran,” said Gary Lynn Hessong, president of the Montgomery County-based Texans United for Freedom.

The rising local veteran population is supported by more veteran services at the Tomball Veterans Affairs Outpatient Clinic, growing membership at the Veterans of Foreign Wars Post 2427 in Tomball, and community initiatives to build veterans memorials in Tomball and Conroe.

“Our Tomball clinic is one of our fastest-growing clinics,” said Maureen Dyman, communications director for Houston’s DeBakey VA Medical Center, in an email. “Our goal is to move as much care as possible out to the clinic to make it more convenient for our veterans.”

Despite veteran populations declining 10% and 4.8%, respectively, in Harris and Montgomery counties, from 2013-17, the Tomball and Magnolia communities added 245 veterans during that time, census data shows.

“People out in this area—Magnolia—are very patriotic,” Hessong said. “We’re a very prideful group of people out here in the country and [in] Texas in general.”

Hessong founded TUFF in 2014 to support local veterans and first responders, hosting the annual Cooking4Courage cookoff event in Magnolia for two years before moving it to the Montgomery County Fairgrounds.

To help employ local veterans, a Boots to Badges program is also in the works, Hessong said, which will provide grants to veterans training for first responder certifications. She said she hopes the first veteran will be enrolled in the program this November.

“With their [program] offering and their Lone Star veteran community ... I think they set up a great magnet to pull in those young veterans,” Ellis said.

Just more than 50% of local veterans have served from August 1990 or later, according to census data.

Cobb said the VFW averages 26 new veterans each year but has already added 17 new members in the first quarter of 2019. The VFW fosters a peer community and helps veterans apply for benefits, Ellis said.

Cobb, a veteran, said he chose to move to the Greater Tomball area because of the state’s lack of income tax and the educational benefits and access to health care for veterans. Texas has historically offered veterans educational benefits via the Hazlewood Act, which affords eligible veterans, spouses and dependent children a tuition exemption of up to 150 credit hours—enough to earn a bachelor’s degree—at most public higher education institutions in Texas, according to the Texas Veterans Commission.

From Jan. 1-March 31 alone, the Tomball VA Outpatient Clinic gained 600 patients, Patient Advocate Martha Chandler said April 2 during a Greater Tomball Area Chamber of Commerce committee meeting. The clinic is the newest of the nine outpatient clinics in the Greater Houston area, having opened in October 2013.

“There’s a huge demand for our services here,” Chandler said. “We’re only so big, but we want to be able to do as much as we can here in Tomball, at least specialty-wise.”

To better accommodate its growing patient base, Chandler said the Tomball location will soon offer clinic hours on a weeknight or Saturday morning. Dyman said extended hours will be announced this summer.

“We’re tickled to be in Tomball. We’re just growing by leaps and bounds,” Chandler said.

Seeing a need for around-the-clock mental health resources, the Tomball VFW brought on a full-time counselor from The Point Therapy less than two years ago, Ellis said. This gives veterans 24-hour access to mental health, family and marriage counseling services by phone or on-site at the VFW at no cost, he said.

“When that depression hits, when those family arguments emerge, it may not be operating hours Monday through Friday,” Ellis said. “Whenever there’s an issue that emerges, our veterans have an opportunity to talk to somebody and get through what’s going on in their lives at that moment.”

To provide a local place of solace for the growing number of veterans and their families, the Tomball VFW and Montgomery County Veterans Memorial Commission are constructing memorial parks.

The Tomball Memorial Park on Alice Road will feature memorials for military conflicts since World War I as well as military items donated by the Military Historical Society, Ellis said. Additionally, community members can purchase bricks to line the pathway in honor of a service member.

“It’s just a location where [people] can come [and] have that somber moment of reflection, seeing local names and families that … served in those events,” Ellis said.

The park will also include a community pavilion and a Vietnam War Memorial replica featuring local names. Ellis said he hopes to begin these phases—pending community donations—within a year. The estimated project cost ranges from $125,000-$135,000, Cobb said.

Plans for the Montgomery County Veterans Memorial Park and Educational Center are also ongoing in Conroe to relocate the existing downtown Conroe memorial to 8.3 acres southeast of Hwy. 105 at I-45 North, said Jimmie Edwards, Montgomery County Veterans Memorial Commission chairman and Vietnam veteran. The park will also feature submitted names of veterans nationwide, a first responders memorial and an education center, he said.

Edwards said he envisions the commission serving as a hub of local veteran resources and offering veterans organizations gathering space at the education center.

The six-phase project is estimated to total $10 million-$12 million over five to seven years, Edwards said. Funding for the project comes from private donations, the city of Conroe, Montgomery County, grants and other municipalities, Edwards said.