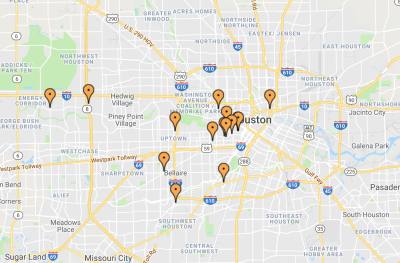 A map of participating restaurants can be found at nightoutforaustin.com

Over 70 restaurants across the country and more than a dozen in Houston have stepped up to help raise funds May 2 to help secure the release of Austin Tice, a Houston native and journalist held captive in Syria since 2012.

During Night Out For Austin Tice, restaurants are joining The National Press Club, the Washington Post, Georgetown University and Reporters Without Borders in the cause. The restaurants have pledged to contribute 10% to 20% of their proceeds from May 2 sales to complement the $1 million the FBI offered in April 2018 for information leading to his return.

For some Houston restaurants, the cause hits close to home.

“I’ve known Austin since I was about 8 years old,” Jason's Deli manager Issa Ammar said in a release. “He was like a big brother to all the neighborhood kids. It’s been heartbreaking to think about what he’s going through, knowing there was not much we could do to help until now.”

One of Jason's Deli's west Houston locations is participating.

Tice, a former Marine, Eagle Scout and alumnus of the University of Houston and Georgetown University, wrote for the Washington Post, McClatchy Newspapers, and CBS News. He left law school at Georgetown to help cover the conflict in Syria, according to a statement on the Night Out for Austin Tice website.

Here is a list of participating restaurants in Houston. Additional locations can be found on the Night Out website.