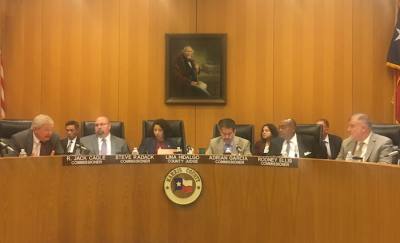 The request, approved unanimously by Harris County Commissioners Court at an April 30 meeting, will allow District Attorney Kim Ogg to hire two chief prosecutors, two felony prosecutors, two investigators and two paralegals at the cost of $850,000. The move comes in the wake of recent lawsuits filed by the county related to two separate chemical fires—one at an Intercontinental Terminals Co. storage plant in Deer Park in March and one at a KMCO LLC facility in Crosby in April.

Assistant District Attorney Alex Forrest, who also leads the environmental crimes division, said the division currently works mostly on "housekeeping violations," referring to smaller scale illegal dumping and littering crimes committed by mom-and-pop companies that he said often do not realize they are doing something illegal.

Forrest said the new prosecutors are needed to help the office take on larger-scale investigations that require more patrolling, intelligence gathering and the cultivation of whistle-blowers. He said moving toward enforcement instead of responding to emergencies after they happen could help prevent future environmental disasters.

Ogg came to the court in February, as commissioners were preparing to adopt that county's annual budget, with a request to hire 102 new prosecutors at the cost of roughly $20.6 million, a request that included the eight new hires for the environmental crimes division. The request was denied, and County Judge Lina Hidalgo instead called for a comprehensive study of the county's criminal justice system to find other ways to reduce caseload backlogs.

In expressing her support for the eight new hires at the April 30 meeting, Hidalgo warned that she did not want to see the district attorney coming back later with additional requests for more prosecutors.

"We need to be thoughtful that this is not leading us down a path … where we are using this instrument as a hammer when really we need something much more accurate," she said. "We need to be thoughtful in making clear that we are not opening the door for the 102 prosecutors to be brought piecemeal. There’s a reason we wanted to look at an evaluation of the criminal justice system as a whole."

Rusty Harden, an attorney representing Arkema executives facing criminal charges related to a 2017 plant explosion during Hurricane Harvey, spoke in opposition of the move, saying he did not think criminal prosecution was the right approach to the issue. He said the funding would better serve pollution control and regulatory agencies.

"Criminal prosecution doesn’t deter, it punishes," he said. "When this thing happened, Arkema had press conferences, they alerted everybody. What you do with prosecution is make everybody hunker down. If they think when they make a discretionary decision they could be charged with a crime, they are not going to come forward."
SHARE THIS STORY