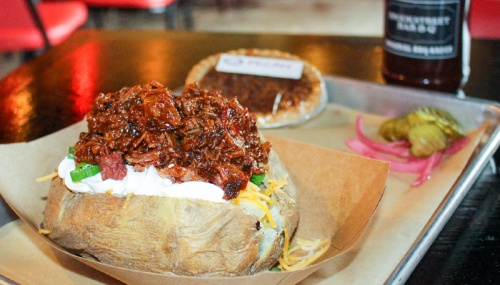 Owners Jamil Musa and his nephew Lutfi Rukab opened the original Brookstreet in Sugar Land 20 years ago—its anniversary was on March 3 after gaining inspiration from other similar restaurants.

“We purchased a barbecue pit and expanded the menu to include smoked ribs,” Rukab said. “The ribs became an instant hit. This is how the conversation to open a barbecue restaurant started. We decided to give it a go when a space became available on Hwy. 6 in Sugar Land.”

They subsequently opened the Missouri City location in 2007 and also have locations in West Houston and Montrose. There is an express restaurant in Richmond, and another will open there this summer.

In addition to the large dining room, the Sugar Land and Missouri City locations have a party room that can be reserved. Brookstreet also does a lot of business through its drive-thru, with families picking up meals on the way home.

“Customers often order ranch beans and potato salad as their sides,” she said. “My favorite is the mac ’n’ cheese.”

The Missouri City restaurant is often busy on Friday nights—the only night when the popular catfish special is available. The meal includes two fillets, two hushpuppies and two side orders for $11.25.

“As we enter year 20, we are still innovating to elevate our standards and create better procedures and end product,” Rukab said. “None of this would have been possible without our loyal customers. We regularly run into customers that tell us, ‘Brookstreet is part of my childhood.’”