Redoing recapture: What it means for Eanes, Lake Travis ISDs 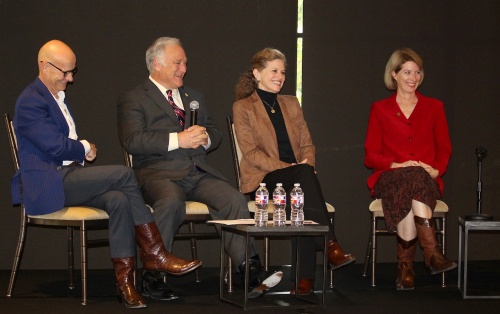 Eanes ISD has sent more than $1 billion of local property tax funds to the state of Texas since the recapture system was established in 1993. Lake Travis ISD has sent about half a billion. The amount districts send increases rapidly with taxable value   growth like in Lake Travis ISD, where recapture payments have gone up 100 percent in a decade.

What began as an attempt to equalize school district wealth across Texas and make up for a lack of an income tax is now an outdated, broken formula, according to many state senators, representatives, administrators and parents. When recapture, or what many call “Robin Hood” was enacted, 33 districts were required to pay money back to the state. Districts with the highest property values contributed about $130 million toward the state’s public education budget.

Today, about 250 districts are paying into recapture, meaning about 60 percent of Texas’ education fund comes from property taxes.

But local district officials say rising property tax payments across the state, including the Lake Travis-Westlake area, do not mean more money for schools. Local districts send a larger sum back to the state every year, but what is redistributed to everyone, the basic allotment, remains the same.

Once a district reaches a wealth-per-student value of $514,000, it must start paying recapture. LTISD has a value of about $1 million per student.

“We’re seeing all this growth out here, but we’re not getting to use most of that value coming in,” said Johnny Hill, LTISD assistant superintendent for Business, Financial and Auxiliary Services.

EISD has a value of about $1.66 million per student, according to district data. What many homeowners do not realize is that the district is not keeping that large sum, Superintendent Tom Leonard said.

“Whether someone is a business or homeowner, their property taxes are going up at a high rate,” Leonard said. “They get confused because of the way the state is representing where that money goes–they point their fingers at the school district because our name is the biggest on that increase.”

Hill said every district in Texas, rich or poor, gets the same $514,000 value per student for basic education.

Each year districts paying into recapture throw their varying shares into a pot; the state adds its portion, and then the $514,000 per student is redistributed. But if more is thrown in the pot each year from the local districts’ rising taxes, where is the extra going?

“As more local property taxes come into the state to cover the cost of public education the state owes less,” said state Rep. Donna Howard, who is also a former EISD board trustee. “Rather than ratchet up the state’s amount so there is no reliance on property value increases, the state has taken advantage of that windfall for the past decade.”

The state is using the additional funds to not only cover educational expenses such as population growth, but also to pay for non-education-related state expenses, Howard said.

The budget cycle passed in the last legislative session projected and counted on an additional $7 billion of local property taxes.

“Rather than putting the entire $7 billion increase into public education, they used about $3 billion to pay for parts of the budget that had nothing to do with public education,” Howard said. “More and more people are becoming aware of this and demanding change as taxes rise.”

State Rep. Vikki Goodwin said though school finance has been a problem for many years, it has come to the forefront this legislative session because voters made it a priority by electing those who ran on the position they would prioritize a fix to the system.

Both Howard and Goodwin said they are optimistic because the Legislature has a larger budget to work with this session–$9 billion more in revenue over its previous budget of $119 billion.

Leonard and other EISD representatives were at the Capital for the opening of the Legislature in January and plan to push for reform until the end.

“The general concept we are for is additional funding for schools,” Leonard said.

Many officials cite raising the basic allotment–last done in 2014–as a potential fix. Howard said that would mean a higher guaranteed amount per pupil, and the point at which a district would have to start sending back dollars would also increase.

Along with raising basic allotment, Goodwin, Howard and others said modernizing the formulas that determine how much money a district receives could be implemented this session. The formulas are decades old and not reflective of the current economy, Howard said. Rather than use arbitrary numbers, there needs to be a system that truly reflects the weighted differences applied to students with particular needs. English language learners typically need additional revenue to achieve success, but no multiplier for that figure has yet been determined with evidence to back it up, she said.

Heather Sheffield, an EISD parent and founder of Eanes Advocates, said she was hopeful the Texas Commission on Public School Finance–formed last legislative session–would look into specific costs of education. Since that direction was not pursued, Sheffield said she believes a study on the actual cost of educating children is needed.

Howard is working on a state constitutional amendment for public vote. It would stipulate anytime the state gets property tax value gains through which it reaps the benefit of extra taxes coming in, all money would go into the basic allotment rather than being spent on non-public education-related expenses.

Goodwin said she plans to co-sponsor a bill that would require the state pay 50 percent of school finance.

Howard said another potential fix could come from Texas Comptroller Glenn Hegar, who is proposing a Texas Legacy Fund through which a sum of money would be taken from a savings account and invested at a prudent but higher-than-usual yield.

“If we take that separate, sustainable stream and use it for teacher pensions and health care, then we can take out the need to fund those things from the general revenue, freeing that up to pay for the ongoing expenses of instruction,” she said.

“Cities have nothing to do with rising school taxes and are the innocent victim in this mismanagement of education finance,” said Bennett Sandlin, executive director of the Texas Municipal League. “To divert attention away from themselves, the state keeps pointing fingers at the city and saying property taxes are the problem.”

Goodwin said capping property taxes is not relevant to the issue, and Howard said it would cost the state several billion dollars to make up for the decreased dollars coming in with no apparent plan to replace that money.

Both sides of the political aisle agree school finance reform is issue No. 1, while property tax relief is issue No. 2, said Chad Wilbanks, LTISD parent and president of The Wilbanks Group, which specializes in public affairs strategy for business and politics.

“Despite the state’s rosy revenue picture, Democrats will argue that new or greater sources of revenue are needed, and they will look for a potential new or greater revenue source,” Wilbanks said. “In this case, no entity should feel overly secure.”

He said Republicans will counter that increased state or local taxes are not needed to improve student outcomes, and Lake Travis is perfect example.

“[LTISD] made a choice long ago to pay our teachers a better salary to keep them in Lake Travis–and that plays a key role in the academic success of Lake Travis students,” Wilbanks said.

What will likely happen this session is lawmakers will repurpose existing tax dollars to pay teachers a higher salary with the argument that higher state or local taxes are not necessary, he said.

According to Leonard, the students will feel the consequences most if the recapture system is not reformed.

Class sizes would rise, and teacher pay would not. Programs would have to be eliminated while taxes would continue to go up. The issue is hurting all districts, including those with a high percentage of kids on free and reduced lunch that are still paying back to the state, he said.

“We have been defunding public education in Texas and across the United States,” Leonard said. “That is not good from a public policy standpoint. If we cannot look at our children and their education as a national resource, we have a problem.”