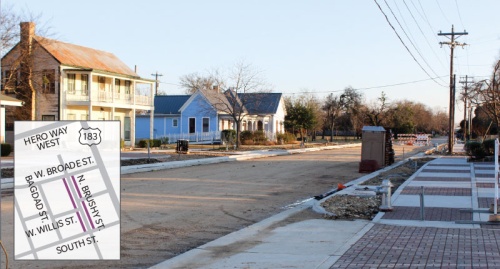 After facing numerous weather delays, construction on North Brushy Street is expected to be complete by May at the latest, according to City Engineer Wayne Watts.

Improvements to North Brushy began in June and include reconstruction of two blocks of the street, construction of sidewalks and landscaping, the installation of a storm drainage system and additional parking, and more.

Funding for the $1.9 million project, which is located in Old Town Leander, comes from Leander general obligation bonds.

Watts said the goal of the streetscape project is to improve the aesthetics and land values in the area.

“It improves the usefulness and attractiveness of the area for city events, chamber [of commerce] events, Christmas festivals and spring festivals,” Watts said. “It basically brings us into a more modern look.”

Several businesses are located on the portion of North Brushy that is under construction, including the Leander Beer Market and Bella’s Beauty Salon. Genc Krasniqi, co-owner of Leander Beer Market, said since construction began, sales have dropped about 40 percent. However, he said he is excited for what the project has in store.

“It will make a tremendous impact and make the city look good. ...” Krasniqi said. “We support it and were very excited about it from day one.”


Other ongoing projects in 2019

San Gabriel Parkway extension: The project, which costs Leander $1.56 million, connects San Gabriel from CR 270 to Ronald Reagan Boulevard. Cagle said at a Jan. 3 meeting that the project is now under construction and is expected to be complete by June 2020.
Estimated timeline: November 2018-June 2020