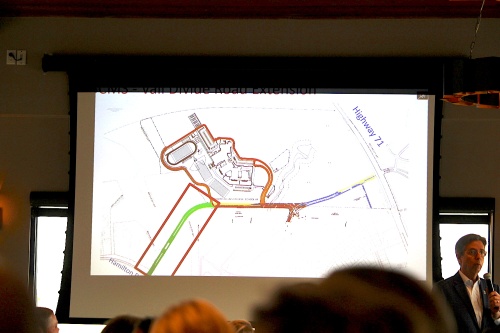 During the annual Lake Travis Chamber of Commerce Economic Forecast Luncheon on Jan. 16, Superintendent Dr. Brad Lancaster clarified updates about Bee Cave Middle School and the roadway that runs alongside it, Vail Divide, denying rumors saying it will connect to Hamilton Pool Road by August 2019.

A new "T" intersection at Vail Divide and the Bella Colinas subdivision is underway, and Lake Travis ISD is working to complete a new section of Vail Divide from Bella Colinas to the end of district property as part of a $2.5 million infrastructure project, Lancaster said.

While LTISD owns the remainder of the land that could house a connection of Vail Divide to Hamilton Pool Road, Lancaster said it would be an approximately $7 million to $10 million project depending on the length of the bridge that spans Little Barton Creek.

That is not a project LTISD can take on by itself. District officials have held several conversations with Bee Cave Mayor Monty Parker and Travis County officials and are currently exploring an interlocal agreement to enter into construction to connect Vail Divide to Hamilton Pool Road, Lancaster said.

He added that prior to any construction, there will be a lengthy permitting and environmental study process.
SHARE THIS STORY