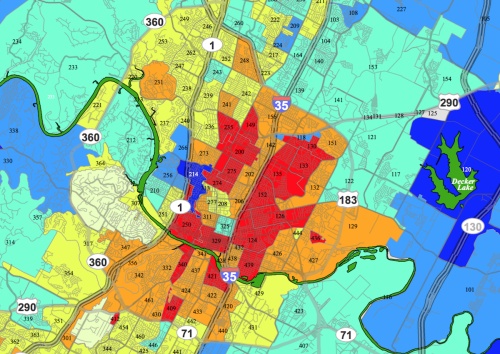 This precinct map shows support for November's Proposition J. The red represents under 40 percent support, orange 40 to 45 percent; yellow 45 to 50 percent; aqua 50 to 55 percent; light blue 55 to 60 percent and dark blue over 60 percent.

Among the biggest questions heading into last November’s general election was whether Austinites would vote in favor of a citizen-initiated ordinance that aimed to give residents final say on comprehensive revisions of the city’s land development code.

They did not. Proposition J, as it was listed on November’s ballot, was defeated 52 to 48 percent. But recently released precinct data shows the heaviest rejection came from Austin's urban core neighborhoods, the areas of town where the Austin Neighborhoods Council–a group that strongly supported the proposition-is entrenched. With only a couple exceptions, a significant majority of voters in nearly all Austin’s urban core neighborhoods voted against the proposition, while the strongest support came from the city's outskirts and extraterritorial jurisdiction. The “urban core” is bound by Mopac to the west, Route 183 to north and east, and Route 71 to the south.

The question of citizen voting rights was inspired by controversies over CodeNEXT, the city’s recently failed attempt at such a code revision. Opponents of CodeNEXT formed PACs, campaigned on what they considered neighborhood interests and garnered over 30,000 signatures of support on a petition to give citizens the final say on code rewrites. They argued that CodeNEXT’s push for housing density would threaten the character of the mostly single-family residential neighborhoods they long called home, The petition eventually made its way to November’s ballot as Proposition J.

The ANC, a group that represents nearly all neighborhood associations in the city’s urban core, was among the proposition’s staunchest supporters; however, that failed to translate at the ballot box. President Jeff Jack blamed the results on the city’s changing demographics.

“It used to be that we were primarily single family residential neighborhoods, but in the last five years we’ve built all these apartments … so we have renters who aren’t engaged in the neighborhoods,” Jack said.

Jack also attributed the numbers to what he called the “Beto effect,” referring to Texas democratic U.S. senate candidate Beto O’Rourke, who drew many new voters to the polls in November. Jack said young voters also fell for attack ads that linked Proposition J to current U.S. President Donald Trump, something he said would not have worked on “engaged” neighbors.

Austin Mayor Steve Adler, who campaigned against Proposition J, said the precinct data tells him that the city did not want to hear the “status quo voices.”

“That’s why, to me, I think this election was significant and why I think there was a mandate in this election to do big stuff and move the city forward,” Adler said. “With that comes an expectation. The people are giving us the tools and the opportunity to do it, now they want us to do it. “