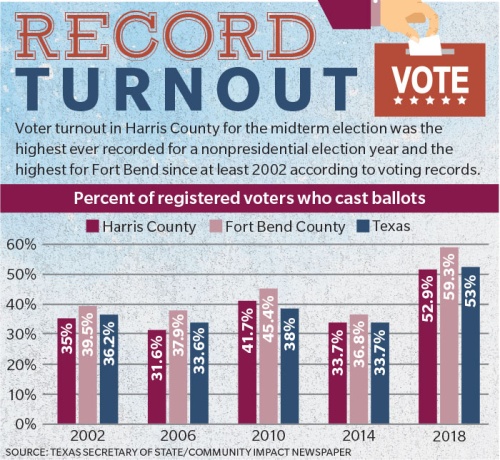 Experts who study voting trends locally said high-profile races—such as the state’s U.S. Senate race between Democrat Beto O’Rourke and incumbent Republican Ted Cruz—helped push people to the polls in the Katy area. Sources said straight-ticket voting, which will be eliminated by the next election, was a factor in both Harris and Fort Bend counties, especially in county-level elections given the number of races.

With more than 250 races to watch in the Greater Houston area, it is understandable that residents vote based on races receiving the most media attention, said Linda Voht, president of the League of Women Voters of the Houston Area.

In the Harris County portion of the Katy area, Precinct 522 near the intersection of Kingsland and Westgreen boulevards was busiest during this year’s election with 65.1 percent of the precinct’s voters casting ballots. Fort Bend County Precinct 3144 near the intersection of Cinco Ranch Road and Cinco Crossing Lane saw the most voters for the portion of the Katy area in that county with a 67.8 percent turnout.

The 2018 midterms were  the last Texas election in which straight-ticket voting was an option, allowing voters to push one button to select all candidates from one party. In 2016, state lawmakers passed a bill ending the practice in 2020.

In the Nov. 6 election about 76 percent of voters in Harris County cast a straight-ticket ballot. That number was about 66 percent in Fort Bend County.

While straight-ticket voting has been useful to voters Voht said she hopes Texans will begin preparing ahead for elections by completing sample ballots. She understands the number of elections voters see is daunting.

“You’re [still] going to have people that are going to check all the Republicans or all the Democrats or all of the Libertarians,” Voht said.

Hidalgo, who will take over as Harris County judge Jan. 1, defeated Emmett by roughly 19,000 votes.

“Seventy-seven percent of the people voted straight ticket, and the margin of Democrats over Republicans is 105,000. … There aren’t enough non-straight-ticket voters out there to make up the difference,” Emmett said after a Nov. 13 commissioners court meeting.

Richard Murray, a political science professor and director of the Survey Research Institute at the University of Houston agreed with Emmett.

“Three-fourths voted a straight-ticket Democrat or Republican and there were 100,000 more Democratic votes than Republican, and that was too much for the [Harris] County judge to overcome,” Murray said.

Hidalgo said while straight-ticket voting was a factor, her campaign and the Harris County Democratic Party worked to get people to the polls for candidates in positions such as the one she sought.

Hidalgo was not the only new Democrat to be elected to the court. Former Harris County Sheriff Adrian Garcia won his bid to unseat Precinct 2 Commissioner Jack Mormon. Democrats will now hold a majority of seats on the court in January.

Hidalgo said her priorities will include overhauling criminal justice, improving transparency and flood prevention. As for initiatives Emmett’s administration began, such as projects associated with the $2.5 billion Harris County Flood Control District bond, Hidalgo said she will work with colleagues to determine whether changes are needed.

In Fort Bend County, George defeated incumbent Republican Hebert by about 15,000 votes and will take office Jan. 1. Hebert was first elected to the county judge’s seat in 2003.

George received 52.91 percent of the vote.

“My top priorities are community engagement and emergency management so when [something like] Hurricane Harvey happens, we know what to do,” George said.

Hebert said at the county level the switch in party affiliation will not have a huge impact on operations because the roles of the commisioners and judge help county government work in a less partisan manner than the state and federal levels.

“For most of my time in office we had ... an evenly split court politically, but we all worked together,” Hebert said.

Schofield, who lost his Texas House seat, believes the Katy area remains conservative. He credits the change in the Fort Bend and Harris county judge positions to a well-organized Democratic campaign that used straight-ticket voting and data gathering to its advantage.

He thinks the 2020 election will see Republicans applying lessons learned from 2018.

“However, I expect next election that we’ll see Republicans regain ground in Texas,” Schofield said. “Typically, after a wave year, there’s a receding of the wave.”

The Texas House seat for District 132 that Calanni won was one of 12 seats statewide flipped from Democrat to Republican, according to the secretary of state’s office. The district represents Katy and Cypress.

Although the loss of 12 seats by Republicans did not result in a change of control in Austin, it could result in new priorities for lawmakers to address during the 2019 legislative session, said Mark Jones, a political scientist with Rice University.

“I think there’s going to be a tendency to focus more on bread -and-butter issues and less focus on hot-button issues,” Jones said. “Bread-and-butter issues would be things like school funding, infrastructure, trying to find some type of movement on health care.”

The midterm results could also have implications on who the next speaker of the house will be, Jones said.

“I think we’re probably looking at a Texas House that now elects a speaker who is more in line with [former speaker Joe]Strauss than somebody who is more conservative,” he said.