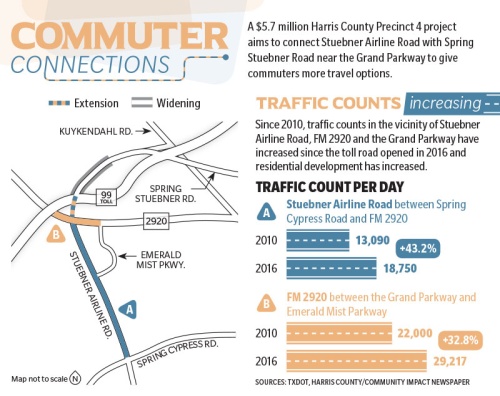 Stuebner Airline Road is slated for a $5.7 million project to widen and connect the thoroughfare to Spring Stuebner Road in light of increasing traffic on FM 2920 near the Grand Parkway, Harris County officials said.

Pamela Rocchi, director of  Harris County Precinct 4’s Capital Improvement Projects Division, said a project to connect the roads is now in the study phase. The project will extend Stuebner Airline Road as a four-lane concrete pavement section between
FM 2920 and the Grand Parkway at Spring Stuebner Road as well as widen the portion of the road 1,500 feet northeast of the Grand Parkway currently named Boudreaux Road.

The extension of Stuebner Airline Road will connect to the existing intersection at Spring Stuebner Road and the Grand Parkway, which has traffic signals, and it will continue underneath the existing Grand Parkway overpass, she said.

Stuebner Airline Road, a countymaintained road, has been upgraded several times since it was designated a “major thoroughfare” in the city of Houston’s Major Thoroughfare and Freeway Plan in 1987, Rocchi said.

About $11.8 million of work has been carried out since then to improve Stuebner Airline Road between Louetta Road and FM 2920, Rocchi said.

Missing segments are installed as traffic demands warrant and funds are available, she said.

“Both of these factors are now favorable for pursuing the missing segment of Stuebner Airline Road between FM 2920 and Grand Parkway,” Rocchi said.

Rocchi said in addition to connecting Spring Stuebner and Stuebner Airline roads, the proposed extension will also help to mitigate congestion during peak commuting times at FM 2920 and the Grand Parkway by providing an alternate route.

The Texas Department of Transportation’s Statewide Traffic Analysis and Reporting System shows average daily traffic volumes on Stuebner Airline Road between Spring Cypress Road and FM 2920 increased from 13,090 vehicles in 2010 to 18,750 in 2016.

The project is in the study phase, which allows the county to establish drainage needs and determine if any additional traffic control is needed at the intersections, Rocchi said. A timeline for completion has not been set.
SHARE THIS STORY