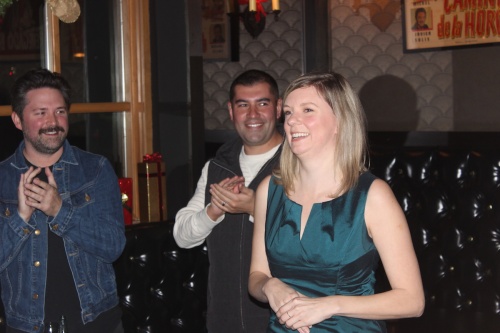 Ellis, a marketing specialist for the local environmental consulting firm aci Group, defeated Ward, a member of the city’s parks board, 56 percent to 44 percent. Ellis continued her momentum from the Nov. 6 general election where she topped Ward, the second place finisher, 30 percent to 25 percent.

Although voter turnout was nearly 70 percent in District 8 during the general election, the runoff produced lesser numbers; however, the 17 percent turnout in the Southwest Austin district runoff was higher than the 5 percent citywide turnout.

Ellis’s victory means all 11 members of the Austin City Council dais are liberal, a first in the 10-1 City Council era. She will succeed Council Member Ellen Troxclair, the lone conservative voice since the start of 2017, who announced this summer she would not seek a second term.

“I jumped into this race because I didn’t agree with my representation and I decided to do something about it,” Ellis said to her supporters at the Alamo Drafthouse off Slaughter Lane Tuesday night. “I stopped waiting for someone to do it for me. I rolled up my sleeves and got to work. We believe Southwest Austin deserves a true representative voice.”

Ellis fashioned herself as an environmental champion, and quickly earned such endorsements heading into the runoff, including endorsements from her two other opponents from the general election, Rich DePalma and Bobby Levinski.

Ward, the only conservative in the pool of District 8 candidates, quickly earned Troxclair’s endorsement, but could not get enough people to polls in the runoff election. Ward did not immediately return calls for comment.

“Everyone knows I ran as a proud Democrat,” Ellis said. “But I want to be a representative for everyone in Southwest Austin and really create the change that we need here.”

Ellis will officially take over as Austin City Council’s District 8 representative following her inauguration on Jan. 7