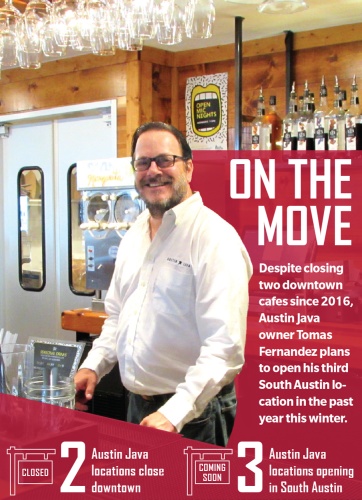 Despite closing two downtown cafes since 2016, Austin Javanowner Tomas Fernandez plans to open his third South Austin location in the past year this winter.

Historically high rental rates and taxes in downtown Austin, paired with a high-demand for retail and office space, has forced many downtown business owners to consider moving to South Austin and other more affordable areas around the city.

Austin Java owner Tomas Fernandez said closing the business’s longtime location on Barton Springs Road this July, just nine months after shutting down the original location on North Lamar Boulevard, was a difficult decision to make emotionally. However, he said it would have been impossible to survive without a change.

“We could either raise our prices to meet the cost and demands of being in the urban core of Austin, or close,” Fernandez said. “We didn’t feel it would be fair to our customers to charge them a premium for our food. That’s not what Austin Java had been about for the past 20 years.”

Fernandez decided to search in South Austin for new locations instead of remaining downtown. Austin Java opened a location east of Dripping Springs on Hwy. 290 this spring and is set to open a new cafe at 5404 Manchaca Road in South Austin in December. Fernandez also opened a cafe in August at the MetCenter in Southeast Austin.

“We’re seeing that all throughout the city,” said Joe DeCola, vice president of commercial real estate service NAI Partners. “All of these retailers, businesses and restaurants are moving to the outlying areas because of the rising rents and taxes.”

An approximately 175 percent increase in property taxes over the last five years and retail rents close to $40 per square foot downtown has created an environment that “retailers just weren’t signed up for,” DeCola said.

“Some are still profitable, but not as profitable as they were, so ownership is going to higher-end, newer areas and have sold the downtown stuff because the rents were too high for what they wanted to accomplish,” he said.

Downtown  businesses pay on average $38.99 per square foot of retail space and $47.02 for office space. Compared to South Austin, where rates are $23.65 and $32.08 respectively, it is easy to see why businesses are relocating. However, with a city-wide occupancy rate over 96 percent, those who are moving still face the challenges when finding available space.

Jessica Pearson, owner of Path Nutrition, moved her office Nov. 1 from a suite on West Sixth Street downtown to 1825 Fortview Road in South Austin. Pearson said she was not given an opportunity to renew her lease when the landlord decided to turn multiple suites into one unit for a tenant willing to pay more.

“We loved our location because we got a lot of drive-by traffic,” she said. “We were paying a pretty good price for the space, but it was an old home with five tenants.”

She said while the old space had its limitations, she likely would have stayed if able until the business outgrew it. At the price she was paying she said finding a similar space downtown was “basically impossible.”

Stephen Wentworth, a retail services associate with NAI Partners, said due to the high demand developers have placed on property, landlords are now more likely to sell their land for top dollar instead of leasing the space out.

“It usually comes to an end for these local retailers that have been in spots forever as soon as their current leases are up,” Wentworth said. “They’re not going to be given a chance to renegotiate and stay in the space, and they’re not going to find anything affordable in the area.”

After 11 years operating in Central Austin on Congress Avenue just south of the Colorado River, the Doc’s Motorworks bar closed because the landlord sold the property for new development, owner Charles Milligan said.

“We tried to buy the land, but they sold it to a development group above market price, which changed the Congress landscape,” he said. “The land was purchased, and every single mom and pop had to leave within a six-month period.”

Fortunately Doc’s Backyard was already an established business in Sunset Valley prior to the closure of Doc’s Motorworks, Milligan said.

Why move to South Austin?

Milligan said he opened Doc’s Backyard in 2007 because he wanted to invest in South Austin and open a downtown-style bar in an area that—at the time—was underserved. He said area families and former downtown customers have embraced the location.

Especially with restaurants, franchises and retailers using a large space, DeCola said businesses are following the population instead of leasing spaces in the business district.

Fernandez said one reason Austin Java moved away from downtown is that many families have moved to South Austin, areas east of I-35 and near Dripping Springs.

“A lot of people used to go to Austin Java years back when they were off to college or working downtown,” he said. “Now those folks have gone outside of town to live and raise their kids where it’s a little bit more affordable.”

With thoughts to expand production and add a brewery element to Austin Java in the future, Fernandez said older spaces downtown likely would not have been able to accommodate.

Wentworth said the Southpark Meadows shopping center on Slaughter Lane is a good indication of what has changed in South Austin over the last 10 years. As the population moved south, big-box stores, restaurants and franchisees began to move in to provide new services to the area.

“The population is there, and if I’m a franchisee and have to pay well over $30 a [square] foot north of the river, I’m going to go down south instead to a place where my services aren’t available yet,” he said.

Pearson said she looked in South Austin initially because it is where she lives. She found a larger space and at a lower price. Having free and ample parking for customers compared to limited parking capabilities downtown was also an added benefit.

A threat to local businesses

The trend of rising rents and landlords selling off properties is not exclusive to Central Austin. While some businesses are moving from prominent downtown locations to South Austin, businesses in the south are struggling to maintain their spots in the community.

DeCola said while rents may be less than in the center of Austin, long-standing South Austin businesses have experienced rent increases as well. Moreover, as businesses from elsewhere move in or higher-end developments are built in the area, local businesses in older buildings could struggle to keep up.

In September, Hill’s Cafe closed on South Congress. While the property is still owned by the Goodnight family, who owned Hill's Cafe, it will be redeveloped into a mixed-use project.

At the south end of Manchaca Road, It’s About Thyme garden center closed after almost 40 years of business over the summer because the property’s longtime landlord decided to sell. Owners Diane and Chris Winslow looked to purchase some land of their own or rent in the area, but infrastructure and permitting at a new location was too much of an investment to take on. The couple decided to retire instead of relocate.

“It’s About Thyme had to close because of high costs as so many other businesses have had to in Austin,” said Davis Sargert, a former It’s About Thyme associate. “It was devastating to them. Their livelihood had been in the Manchaca area for decades.”

For small-businesses owners facing high rents and rising property values, Fernandez said there is not much that can be done to slow area growth.

“The landlords see the opportunity to make more money and they are businesses, too,” he said. “You have to be more aware of what it’s costing you to be at those locations, how it’s going to affect your business and what you can control.”

With Austin Java, Fernandez said he looks to open in places where his business would be seen as “an amenity.” He said by doing so, business owners may be able to negotiate better deals with a landlord.

While It’s About Thyme has permanently closed, Sargert said he is planning to open his own nursery in South Austin in the near future.

“It’s About Thyme was a fixture,” he said. “They had wonderful people, a wonderful staff, and were really the plant suppliers for the community for decades and had such a following.”

Called Grandpa’s Gardens, he plans to share land with a local church and also create some gardens on-site, opening the space to the community.

“The great thing about South Austin is we’re a pretty tight-knit community,” Sargert said. “Everyone in business knows everybody else, and we are all very supportive. We’re going to be the most humble nursery you’ve ever seen, but with the community’s support I feel that we’ll be able to make a presence and a place people can enjoy.”