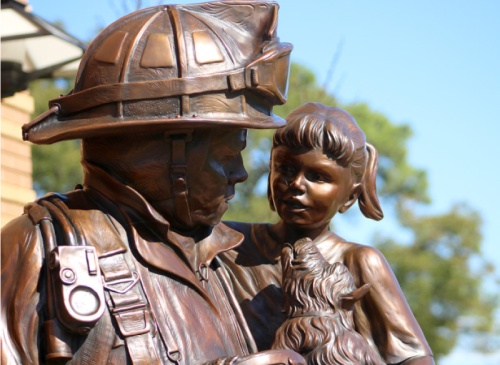 Arlington-based artist Darrell Davis said his life changed with a childhood trip to South Carolina’s Brookgreen Gardens, which boasts the largest collection of monumental American sculptures in the country.

“You never know what’s going to foster a child’s creativity [and] make that little spark,” he said.

Since then his work has been featured across the country—including the city of Southlake. His piece “Morning” sits at the center of the roundabout at Carroll Avenue and Dove Road.

“If you go back in history when early man finally had enough food in his belly and had a place to stay … the first thing he did was start drawing pictures on the wall,” Davis said. “I think there’s something innate in the human psyche about creativity.”

The plan identified the city’s much-anticipated Carillon Parc mixed-use development as one of the biggest opportunities for promoting the arts, Mayor Laura Hill said. The city will work to design and install art to coincide with the project’s development rather than adding it after it is completed.

“The library, what we’re envisioning right now is that it’ll be a two-story building—the library downstairs and then some kind of open space upstairs that can be used for a variety of arts,” Hill said. “We need to have some kind of interactive space that can change with what the community wants.”

Southlake is also planning to include art at an upcoming office development, Southlake Commons, at White Chapel and Southlake boulevards. The city is partnering with land planners the Sage Group to install sculptures of donkeys to commemorate the animals that previously lived on the property.

City Council commissioned artist Jane DeDecker to complete the artwork in Southlake Commons during its
Oct. 16 meeting. DeDecker already has other art displayed through the city, including the roundabout at White Chapel and Continental boulevards.

The city can allocate up to 15 percent of its hotel tax revenue to its public art fund, Tribble said. Capital funding for public art can also be allocated as part of capital projects where public art is planned as well, such as in a roundabout. This year Southlake has two public art projects included in its capital improvement program and another funded by hotel taxes.

“A lot of the projects we do are cash funded,” Tribble said.

The city may allocate up to 1 percent of a capital project’s budget for an art component, said Cassie Tucker, assistant to the director of Community Services, in an email. Other public art projects and initiatives outlined in the plan will be completed based upon available funding.

The city can also explore partnerships to support more public art projects, said Terri Messing, a member of the Southlake Arts Council. Separately, Messing is also chair of the APEX Arts League, which often collaborates with the city to provide art education, events and programs.

“I think [more public art is a] trend that we’re seeing in all the communities here,” Messing said. “Everyone recognizes that if you want to be a premiere community where people want to live that you have all the different aspects of life, and art is one of them.”

The cities of Grapevine and Colleyville also have public art projects in the works.

Grapevine has plans to complete sculptures for the city’s softball complex and the upcoming community plaza on Main Street, Parks and Recreation Director Kevin Mitchell said. The artworks will likely be completed in 2019 and 2020, respectively.

Colleyville is installing art pieces in roundabouts at Jackson and Cheek Sparger roads, at Pleasant Run and John McCain roads and at Glade and Pool roads, Assistant City Manager Adrienne Lothery said. Moreover, the city is committing more attention to performing arts with the development of a community plaza directly adjacent to Colleyville City Hall. The plaza will include a stage area, green space, tables and seats and shade structures.

Lothery said the project may be completed as early as summer 2019.

Public art can reflect the values of the community, carrying themes of family, history and nature, DeDecker said.

“To me, it really enriches the fabric of the community,” she said. “I like how each of the pieces within the community offers different perspectives.”