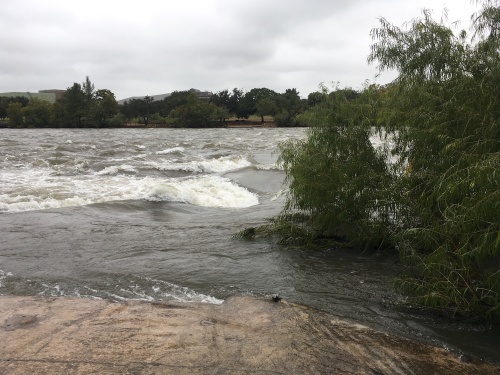 Lady Bird Lake and several other Austin waterways have experienced high-than-normal levels of water and sediment.

Sediment levels are at 8,000 percent of what typically enters Austin’s water treatment plants, effectively strangling operations to a third of their regular capacity as the city continues to sort through its water emergency, officials say.

Chanslor said the turbidity level—a measurement of sediment in the water—has, for a number of days, been around 400. It is typically at a level 5, she said.

City officials have begun urging Austinites to heavily cut back on their water usage. Because of the high levels of contamination, nearly all Austinites have been advised since early Monday to boil their water before drinking. City Manager Spencer Cronk said this is the first time the entire city has been placed under a boil water notice.

City officials say they expect the boil water notice to last a “handful of days,” but Travis County Chief Emergency Management Coordinator Eric Carter told county officials Tuesday they are planning for a worst-case scenario of 10 to 14 days.

John Keane, a principal at StanTec, the at-risk construction manager for Austin’s Water Treatment Plant 4, said the turbidity levels are “far outside” what the water treatment system was designed to handle, although, Keane said he does not expect the system to incur long-term damage from the enhanced stress.

“Situations like this are rare, the weather has been extraordinary,” Keane said. “This is a reminder to everyone of the value of water.”

Austin officials said along with continuing to take precautionary measures and boiling water before consumption, all outside water use is prohibited and urged the public to use indoor water only when absolutely necessary.