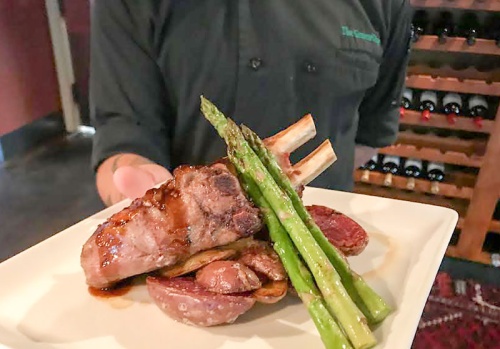 For nearly ten years The Gruene Door has pleased locals and visitors with fresh food and friendly service.

Owner Koury Kahler has a culinary background and an MBA, so when the opportunity arose for him and his wife to purchase The Gruene Door from his in-laws two years ago, he said it was a perfect fit.

Originally from New Braunfels, Kahler attended culinary school in Napa Valley, California and became a chef for Marriott International before going into business.

“The grind in the culinary world gave me super long hours, and we moved around a lot. When I had the opportunity to take this over I knew I could make it what I wanted as far as hours, and honestly, I missed the artistic side of business,” Kahler said.

The upscale-casual restaurant serves a variety of American dishes and contains a full bar with craft cocktails.

Since it uses hand-pressed juices in its drinks and herbs plucked from its own on-site herb garden, the menu changes throughout the year in order to provide patrons with the freshest ingredients and seasonal offerings that the restaurant can offer.

This year the fall menu is made up of entrees served with seasonal fruits and vegetables such as pomegranate and greens. It also features a new signature cocktail named “Charlie’s Revenge,” which is composed of brandy, vanilla cordial, cream and sugar and is finished off with a stencil of a kudu, which reflects some of the restaurant’s decor.

New wine dinners are in the works as well, at which diners will be able to select items from a multicourse menu that will be paired with wine from various vendors.

Kahler says that the good food and the friendly atmosphere is what continuously brings people back to the restaurant as regulars.

“We really get to know those people. We know their names, so when they come in, they feel like family,” Kahler said.

The restaurant also boasts a private room that holds up to 40 people for business meetings, rehearsal dinners, holiday parties and other events.