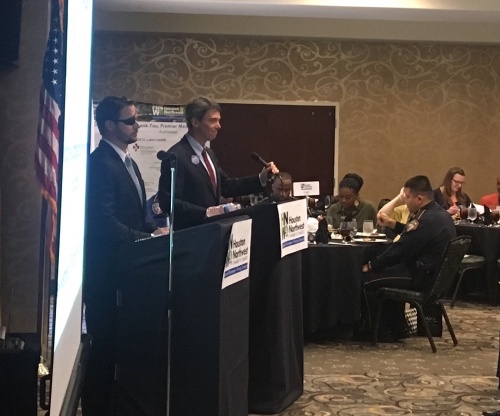 Candidates for U.S. District 2 representative, Dan Crenshaw and Todd Litton, met for a discussion in Northwest Houston on Oct. 11.

Flooding and health care are among the topics on voters' minds in U.S. District 2, said Republican candidate Dan Crenshaw and Democratic candidate Todd Litton at an Oct. 11 forum. Voters will choose a representative for the U.S. District 2 seat, previously held by Ted Poe, R-Humble, in the Nov. 6 election.

Houston Northwest Chamber of Commerce hosted the forum at a luncheon at Hilton Garden Inn on Willow Chase Boulevard, Houston.

State Rep. Kevin Roberts, R-Houston, moderated the discussion, in which the two candidates presented their remarks on several issues.

In their opening statements, both candidates talked about the importance of the upcoming election.

Litton listed education, health care, jobs, flooding and infrastructure among the most important issues at hand.

“[It’s about] working together, finding solutions and getting things done, it doesn’t matter what party you’re in,” Litton said.

Crenshaw said it will be critical for the District 2 representative to be able to solve problems such as flooding infrastructure at the federal level.

“It’s not just a choice between people, it’s a choice between ideas,” Crenshaw said. “Do we value individual liberty and problem-solving at the local level, or do we want [Washington,] D.C. experts to make our decisions for us?”

In addition to flooding, Crenshaw said health care and border security will also be priorities. Litton added that education and jobs are also among the issues he considers most pressing.

The candidates discussed issues affecting local businesses. Health care costs are a major issue for businesses, Litton said. He said he does not think Medicare for All is a solution but Medicaid access should be expanded.

Crenshaw said lower taxes and lower regulations are working to stimulate business and that Affordable Care Act reform is needed.

“We need to continue to simplify the tax code,” Crenshaw said. “We have to work with the president [and U.S. Rep.] Kevin Brady on getting Tax Cut 2.0 established and made permanent.”

On the immigration issue, the candidates discussed border security.

“Our current situation is unsustainable,” Crenshaw said. He said he believes border security should be funded and a way should be provided to allow legal immigration while deterring illegal immigration. “We can enforce our laws and admire the people who want to come here and make our country stronger,” he said.

Litton said he believes immigrants come to the U.S. to work and that border security does not necessitate building a wall.

“We know people come here to build a better life, they don’t come here for handouts; they come here to work,” Litton said. “We need to have a system where we secure the borders, [and] there are ways to do that without building a wall.”

Finally, Litton and Crenshaw each said they have been critical of the president’s tariffs and believe we must work together with international allies.

“These are real lives, real jobs in our country; these steel tariffs hurt people down here that are manufacturing thing ... these tariffs are having a big impact on businesses,” Litton said.

Crenshaw said that although he has been critical of the president over tariffs, he feels they are moving in a more positive direction than he had originally thought.

“We are seeing better deals made with Mexico, Canada, with South Korea, and ... are on a stronger footing with Europe,” Crenshaw said. “We need to work together with allies, and not poke each other in the chest, and [we need to] focus on China.”

For more information on U.S. District 2 candidates, see the candidate questionnaires we shared with them for our October issue. A third candidate, Patrick Gunnels, represents the Libertarian party.