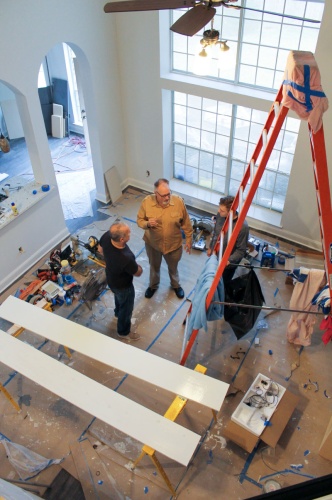 On Sept. 25, the Montgomery County Commissioners Court unanimously approved $432,048 to pay consulting fees to Hagerty Consulting, who will help the county acquire homes in buyout areas.

The list of homes to receive the funding has been on hand with county staff—but has not been made public—since the first applications were submitted after the 2016 flood, according to county staff.

"It took a long time to get to this point," Precinct 3 Commissioner James Noack said. "Y'all will tell us if there's a problem and we'll bring it back."

In a closed executive session that lasted over an hour, the commissioners also discussed potential liabilities and legal implications of the incorporation process of The Woodlands. As part of the process to incorporate, The Woodlands would either need to development departments to provide services, like law enforcement, or negotiate contracts with Montgomery County to continue receiving county services.

"We've asked for [county attorney] B. D. Griffin to reach out to the township attorney to make certain we're all on the same page," Noack said after the public session resumed. "There are a lot of conversations we've had as to contracting with the county for services from law enforcement all the way to road maintenance, signal maintenance, and so we need everybody to be on the same page as far as gauging what the willingness would be from both entities, and what fees would we charge if that were a possibility."

Also during the meeting, commissioners unanimously adjusted the auditor's budget after 410th District Court Judge Jennifer Robin signed a formal allowance. The adjustment comes after she said that because moving $234,000 to a newly created budget department would affect the county auditor’s salary portion of the budget, the court acted outside its authority when reallocating the funding.