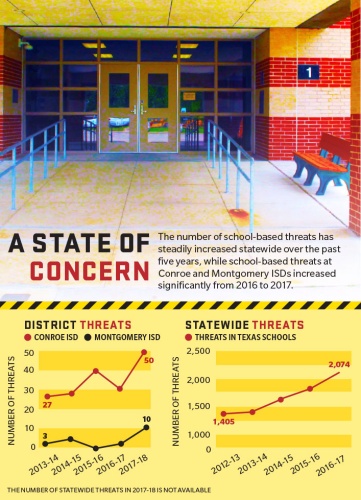 In light of school shootings in Parkland, Florida and Santa Fe, Texas, earlier this year, local school districts and state officials are planning initiatives to improve school safety and security.

For Montgomery ISD Chief of Police Marlon Runnels, the school shooting at Santa Fe High School in May was somewhat of a gut check to the school district police department.

“I’ve always promoted to my officers that the threats are real, so we don’t have the luxury to think that it could not happen to us,” Runnels said. “We obviously hope that it never does occur, but we have to operate under the umbrella that it could potentially happen … and [be ready] to deal with those threats.”

Meanwhile, the number of terroristic threats in MISD rose from three threats in the 2013-14 school year to 10 threats in 2017-18. Runnels said he believes the uptick is an anomaly caused by the national debate on school shootings.

In addition to adding officers and upgrading facilities, both districts are working on strategies to reduce the likelihood of future threats by assessing school culture and providing more mental health services, district officials said.

“Some people can get focused on safety and security, and they think it’s all about door locks and police officers, but that’s the end of the safety and security,” CISD Superintendent Curtis Null said. “It starts with this mental health [component] and the culture and the environment that are established on campus.”

In May after the Santa Fe shooting, Gov. Greg Abbott released his School and Firearm Safety Action Plan calling for measures intended to improve school safety, including providing active-shooter and emergency response training and more mental and behavioral health services.

However, both CISD and MISD already had begun implementing several of the outlined measures. Null said CISD has been steadily adding security vestibules and technology upgrades across all campuses over the last 10 years.

The CISD Police Department was approved to hire 16 full-time officers in the FY 2018-19 budget year for elementary and intermediate schools, CISD Chief of Police Will Harness said.

CISD also recently debuted a new phone app called Anonymous Alerts, which allows students to text anonymous tips to the district’s dispatch office. Sgt. Matt Blakelock, administrative operations for the CISD Police Department, said the app received 35 text tips in the first week and a half of the 2018-19 school year.

As for MISD’s security efforts, it installed security vestibules and bulletproof glass at all campuses as well as 200 additional security cameras and intruder hardware on campus doors with controlled access keys, Runnels said. Beginning in October or November, MISD students will also be required to wear color-coded photo IDs.

Runnels said MISD also plans to implement the Guardian Plan, by the 2019 calendar year. The Guardian Plan is one measure districts can choose from if they want to arm their educators and employees to defend themselves and their students in the event of an active-shooter situation. In a March news release, the TEA cited the Guardian Plan as a safety option, per existing Texas laws, for districts and charter schools.

MISD employees chosen for the Guardian Plan will undergo background checks, mental health screenings and 80 hours of training before being allowed to carry a concealed firearm on campus.

“The Guardian Program … [affords] us more control to build the program the way we feel it needs to be built,” Runnels said. “They’re only going to act in that capacity in an active-shooter situation or a threat of loss of life. That’s it. Other than that, they’re in their everyday roles.”

Increasing accessibility of mental health services for CISD and MISD students is also a concern for local school officials and health organizations. In July, the CISD board of trustees approved a partnership with Tri-County Behavioral Healthcare—a nonprofit clinic serving individuals with disabilities and mental illnesses.

“Population growth is a big driver, but we also have less stigma about seeking care,” he said.

If the pilot remains financially stable, Roberson said he would like to move to other schools around the district and provide a medical health clinic to all students in the future.

State and county officials have also released multiple safety and security plans for improvements. For example, Lt. Gov. Dan Patrick recently appointed the Senate Select Committee on Violence in Schools and School Security. The committee released an Aug. 6 report with legislation recommendations to address school security when it is in session next year.

“Everybody had the same goal and the same mission of let’s make sure we’re prepared and we can do the best job that we can in Montgomery County,” Hans said.