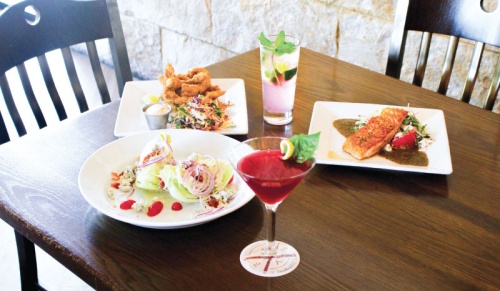 Texas in spirit and local in flavor—that’s the Jack Allen’s Kitchen way, according to owner Jack Allen Gilmore.

The concept began in Oak Hill about nine years ago, and the Hwy. 360 location is one of four that exist today.

“We started without a clue of what we were going to do,” Gilmore said. “All we knew was we wanted great food as fresh as possible, and that to do that we needed to surround ourselves with great local farmers, ranchers, brewers and distillers and honor their product.”

Every Jack Allen’s Kitchen, or JAK, is a little different.

“We’re not a cookie-cutter concept,” Gilmore said. “We’re known for taking a building that needs some love and fixing it up.”

He said he prefers reclaiming materials such as tables and siding made from old barn wood as well as hiring local artists to supply prints for the interior.

Gilmore hired Austin artist George Hampton to paint about 20 pieces for the Hwy. 360 location. Hampton asked Gilmore what he wanted, and Gilmore suggested he drive up and down Hwy. 360 and paint what he saw.

“It was spring and he went to the bridge and saw all the wildflowers,” Gilmore said, gesturing to the many wildflower prints in the restaurant. “He also went with me to the farms where we get our food, so you’ll see those elements reflected, too.”

JAK aims to create a fun and comfortable environment to serve as a meeting and gathering place, Gilmore said.

“It’s a real neighborhood joint,” he said, adding that Westlake means a lot to him. It's where his children attended school.

“I’m happy to be a part of that,” Bean said. “There’s a sense of pride in working here.”
SHARE THIS STORY