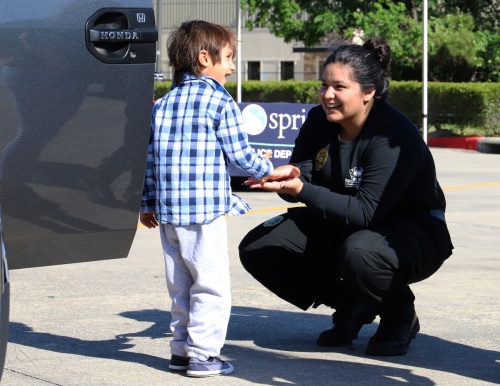 Local school districts began the 2018-19 school year with an emphasis on campus safety, spurred by a governor’s order, nationally publicized school shootings and long-term plans in place to improve their existing facilities and procedures.

Funded by millions of dollars in school bonds, some new security projects in Spring and Klein ISDs include a new SISD police building scheduled to open in September, enhancements to police vehicles and campus surveillance. KISD is adding police officers, securing entranceways and planning other improvements to facilities, partially through funds from the
$498 million 2015 bond referendum.

Beyond the brick, mortar and technological improvements needed in the schools, however, districts are also introducing tools and procedures for students to report bullying and threats this year. And for the second year, KISD offered active-shooter training for other law enforcement agencies as well as their own officers this summer.

“We treat all threats seriously,” SISD Police Chief Victor Mitchell said. “Whether they are being made from inside or outside our schools, we are going to take the necessary steps and use all our resources to investigate every threat thoroughly and respond as needed.”

On May 30, Gov. Greg Abbott released the School and Firearm Safety Action Plan in the wake of the deadly May 18 school shooting at Santa Fe High School in Santa Fe, Texas, that claimed 10 lives. The plan includes at least $70 million in grants available from the governor’s Criminal Justice Division to implement strategies to improve security, resources and training in the 2018-19 school year.

Locally, Spring and Klein ISDs have planned new positions, initiatives and personnel to deal with a range of needs from securing facilities to providing additional mental health support for students, district officials said.

In June, voters rejected KISD’s Tax Ratification Election, which called for a 9 cent increase to the district’s tax rate and would have included $5 million to accelerate some of the district’s planned security measures, including secure vestibules at all campuses and elementary school perimeter fencing. Although the measure failed, Kimberly said those improvements will still take place on a slower schedule.

Another way KISD has responded to concern over school safety and police preparedness is its rapid response training program, Kimberly said. KISD has trained 250 Harris County Precinct 4 constable’s office deputies as well as its own personnel to respond to active-shooter events in the past two years, he said.

“They are in the same neighborhoods we are,” Kimberly said of the constable’s deputies. “If we have an event, we want to make sure they are trained to enter the building.”

The districts already work closely with other law enforcement agencies in the region.

Harris County Precinct 4 Constable Mark Herman said he has worked with districts in the precinct, including Spring and Klein, to provide additional coverage to school campuses from the 300 of the precinct’s deputies who patrol the area. The deputies offer patrol and traffic enforcement at campuses where it is needed and incorporate campus coverage into their beats, but will increase the amount of time they spend on campuses this year, he said.

“That is in response to the sign of the times,” Herman said. “It’s not like it was 30 years ago. You’re seeing more and more of these people that are upping the game if you will, so I think it’s important that we in law enforcement think outside the box.”

Kimberly said he is also meeting with every member of campus faculty and staff and providing professional development on active-shooter response.

Recent bond projects have also supported SISD’s emphasis on safety. The $330 million bond referendum approved by SISD voters in 2016 included $18 million for safety items, including the purchase and renovation of a new police department building and updated equipment for police vehicles.

“We believe these procedures provide an extra level of security to our safety plan, which is continually being evaluated,” Miranda said.

School-based threats are on the rise nationally and in Texas, according to statistics from several education organizations. The Educator’s School Safety Network—a nonprofit organization specializing in safety training from an education perspective—reported a 62.11 percent increase in school-based threats nationally between fall 2016 and fall 2017.

Meanwhile, the Texas Education Agency reported an increase at the state level, with 41.76 percent more terroristic threats made in Texas public schools from the 2013-14 school year to the 2016-17 school year.

Klein ISD recorded 76 terroristic threat investigations in 2017-18—more than twice the 30 reported  occurrences in 2016-17. In Spring ISD, the number of incidents recorded increased from 20 incidents in 2016-17 to 41 in 2017-18. District officials said they are being proactive to respond to all threats rapidly and have developed tools to expedite response.

Kimberly said he believes the increased number of threat investigations came about because of better reporting, in part because KISD launched the Keep Klein Safe campaign on its website this year, providing answers to basic safety questions and a tool for individuals to report threats.

“I’d like to thank our parents and students for keeping us apprised,” Kimberly said of the increased reporting. “It’s a community effort.”

SISD has also launched a new anonymous bullying reporting tool on the district website in response to these concerns, and in 2017, it began using a service called Social Sentinel to monitor social media posts for threatening words or phrases, Miranda said.

“Counselors, nurses and other personnel were provided with more opportunities this past year and summer as these opportunities increased in the community. This allows for staff to provide the best response to any situation students may encounter in their lives,” Gilleland said.

In addition to police training and facility improvements, schools are evaluating the mental health services they provide and examining alternatives to punishments that isolate and alienate students.

“The YMHFA trainings were implemented last school year for district staff as well as community members to prepare them to evaluate and assist with a young person experiencing a mental health crisis,” Zimmermann said. “Since the district began offering the classes last spring, more than 150 people have participated.”

Another approach schools are considering is the use of restorative discipline as a preventative measure.

SISD worked with the Harris County Department of Education on HCDE’s restorative discipline program. Implemented in Bammel Middle School in the 2017-18 year, the program has had a positive effect on student behavior, said Ecomet Burley, director of HCDE’s Center for Safe and Secure Schools.

Restorative discipline uses conversation to mediate conflicts and to talk to students about the source of problems rather than immediately using punishment and isolation as consequences, he said. As a result, the number of office referrals and suspensions decreased at the school by about 50 percent, he said.

“You develop a sense of community, connectedness; and in many cases, kids who were committing violent acts—they were outliers and feel isolated—don’t feel connected,” Burley said.

When the 86th Texas Legislature convenes in January in Austin, it will likely consider a number of measures relating to school security, Kimberly said.

The Senate Select Committee on Violence in Schools and School Security, formed this year, issued a report Aug. 6 detailing its charges to the Legislature. These include improving the infrastructure and design of Texas schools; studying improvements to school security options and resources; and examining the root causes of school shootings, such as mental health and substance abuse, according to the report.

Kimberly said he hopes new safety and security requirements for schools from the upcoming legislative session are not unfunded mandates.

“When you add something like that you have to take something else away that may be scheduled,” he said. “It may mean carpet in a building this year or replacement of a roof or AC system. You have to replace them to stay going, so all that does is push those projects back if we move the money.”