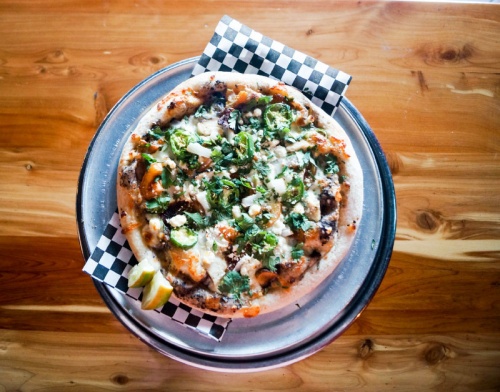 When brothers Joel and Jason Chenoweth started serving food it was through their catering business at events and music festivals. As the business evolved, Joel said their path led to establishing a restaurant off of Hwy. 79 in Round Rock.

The Chenoweths opened Warpath Pints and Pizza in May 2017 with the goal of making the best hand-tossed pizzas, Joel said.

As for as the restaurant’s name, Joel said they found inspiration from an “X-Men” comic book character and from there the business’ identity evolved.

“We wanted Kenny Rogers, Dolly Parton and Metallica and Iron Maiden all on the same jukebox–that’s kind of what we were going for,” Joel said.

Warpath offers its customers a menu as eclectic as its jukebox with pizza toppings ranging from more classic items—such as pepperoni—to less common ingredients like eggs or potato.

“There are people that come in and say, ‘Why would you ever want to put a potato on a pizza?’” Joel said. “But don’t knock it ‘til you try it.”

Warpath features specialty pizzas such as the Sunny and Share, a pizza topped with white garlic sauce, prosciutto, caramelized onion, crispy potato, ricotta cheese and an egg. Another specialty pizza is the Boba Fetta which is made with black bean sauce, mozzarella, buffalo chicken, feta, potato, onion, tomatoes, cilantro and jalepeno.

But for less adventurous diners, Warpath also serves classic toppings and offers a build-your-own-pizza option with a wide range of ingredients from which a customer can choose.

Warpath hosts trivia nights, poker nights and open mics as well as  screenings of sporting events such as football games and UFC fights.

“Come by and check us out,” Joel said. “We have things going on from 11 a.m. until midnight every day.”