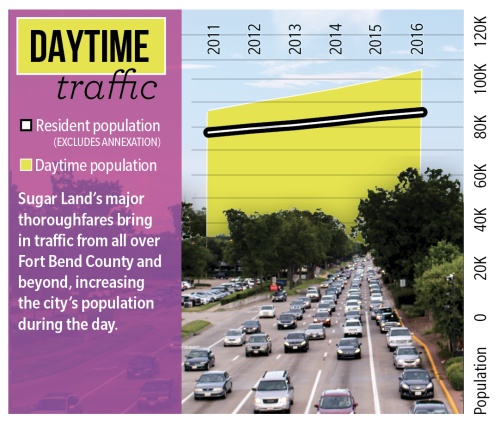 As traffic remains a top concern among Sugar Land residents, city officials continually mitigate this issue with the five-year capital improvements program—19.5 percent of which is dedicated to traffic and streets projects in 2019-23.

Population growth coupled with the major thoroughfares—Hwy. 6, Hwy. 90A and Hwy. 59—creates congestion, and the city is evaluating projects and implementing traffic technology in response.

“Already, way back in the ‘90s, it was recognized that Sugar Land is at the crossroads of Fort Bend County,” City Manager Allen Bogard said. “Hwy. 6, Hwy. 59 and Hwy. 90A are the major arteries through Fort Bend County, and they run right through Sugar Land. That is both a tremendous opportunity and a burden.”

The CIP is funded by several sources, including revenue bonds, certificates of obligation, airport revenues, hotel occupancy taxes and donations. Last year’s five-year CIP totaled $96.4 million with $21.5 budgeted for all projects in FY18.

Although increased traffic that comes with large developments like Sugar Land Town Square can be tough on roadways and frustrating for drivers, the influx leads to a higher daytime population in the city, bringing in more potential customers for local business owners and generating more sales tax revenue.

“In many ways, we are the victim of our own success in that we wanted to take full opportunity of that crossroads to build a marketplace for Fort Bend County here in Sugar Land, and that’s what we’ve done,” Bogard said. “Along with that comes the congestion and traffic. … We need to recognize and accept that yes, traffic is a burden, but it’s also what pays the bills.”

The most up-to-date estimates from the American Community Survey indicate that in 2016, Sugar Land had a residential population of 85,681 and a daytime population of 103,668 people. This is due to factors, such as amenities, jobs and health care resources, Bogard said.

“A lot of traffic that we manage is not locally generated,” he said. “It is coming from other areas, so that’s an additional challenge.”

The Hwy. 59 and Hwy. 6 intersection is the city’s busiest with approximately 125,000 vehicles passing through each day, City Traffic Engineer James Turner said. One FY 2018-19 CIP traffic project will construct a triple left turn from the Hwy. 59 northbound frontage road onto Hwy. 6 to alleviate this traffic.

Additionally, a project in conjunction with the Texas Department of Transportation will expand Hwy. 6 from six to eight lanes from Brooks Street to Lexington Boulevard. Construction is slated to begin this month and last until December 2019, according to the CIP.

“It’s very important that we’re maximizing the utilization of the pavement we have,” Bogard said. “That’s where technology comes in—the greatest effort right now is putting the state-of-the-art technology to work, which maximizes traffic flow and has really helped us keep traffic moving in Sugar Land.”

With developments, such as Telfair-Tract 5 and Imperial Market on the horizon, traffic increases are anticipated, Turner said. Before a development comes to the city, developers must submit a traffic impact analysis to project how much traffic will be generated, Turner said.

“[Telfair-]Tract 5 and Imperial Market are huge developments,” he said. “We are in talks with the [developers] trying to improve the infrastructure around it—whether it be streets, traffic signals, adding more lanes—to accommodate the projected traffic through the studies.”

In addition to major projects at Hwy. 6 and Hwy. 59, the Dairy Ashford Road widening project adding one lane in each direction from Parklane Boulevard to Stiles Lane began in August and will last until December 2019.

“The public has identified dealing with traffic and congestion as a top priority, so we want to continue to make sure we are providing the highest level of service possible within the resources that we have to work with, Bogard said. “The prioritization that engineering does looks for the greatest benefit.”

As the engineering department determines what street projects will be worked on and when, the focus is on capacity as well as safety, City Engineer Jessie Li said during a City Council workshop meeting in late July.

“For traffic projects, we are going to continue the traffic safety and efficiency improvements,” she said.

For street projects, the city continually invests in improvements and rehabilitation each year with roughly $3 million allotted for FY19, Li said.

Improving congestion around Town Square along Hwy. 6 near Hwy. 59 has been 10 years in the making, Bogard said. Although no funds will be allotted in the FY19-23 CIP, roughly $6 million in prior funding will go to widening Hwy. 6.

“You can only widen so much—you can only put down so much pavement,” Bogard said. “We’re maxed out in a lot of the city’s roads. We can’t keep widening our way out of this. We’ve got to be smarter than that, and that’s through the investment in infrastructure at the Traffic Management Center and other things that we’re doing.”

The city’s Traffic Management Center monitors 90 traffic signals, Turner said. With this system, traffic engineers can collect and analyze data to determine which areas need the most congestion mitigation.

Residents can view a real-time traffic map on the city’s ITS website to plan routes accordingly.

“We’ve heard from our residents that mobility is a big concern, so we’ve included additional funding that is targeted at using cutting-edge technology to reduce the amount of time residents are in their cars,” Budget Officer Justin Alderete said. “That helps to ensure that they have safe and efficient travel.”

The website has been active for about five years, and in the last month, city officials finalized the integration of traffic app Waze into the site, Turner said.

The city also uses magnetometers, known as PODS, to detect vehicles, Turner said. This technology is installed in the pavement, and each time a vehicle passes over it, the magnetic field is disrupted, sending a signal saying a car is at or going through an intersection.

Workers in the center can coordinate with the police department to adjust traffic signals in response to accidents or stalled vehicles. During emergency events like Hurricane Harvey or holidays like the Fourth of July, the Traffic Management Center has capabilities to monitor intersections and adjust traffic signal timing as needed, Turner said.

The center was open for 24-hour shifts during Harvey to monitor flooding on streets, Turner said. The center is typically monitored Monday through Friday from 6 a.m.-7 p.m. and Saturdays from 11 a.m.-3 p.m. to keep up with heavy traffic peaks during the day.