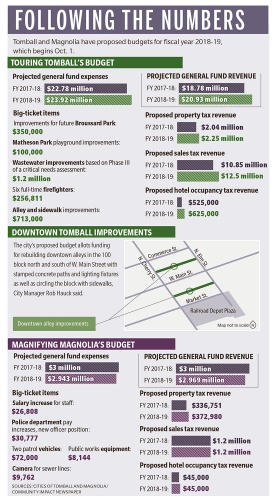 The cities of Tomball and Magnolia will begin their next budget year Oct. 1, and proposed budgets anticipate a bump in property tax revenues for the upcoming fiscal year, according to budget information.

The city of Tomball has not proposed a tax rate for the upcoming year, as city officials are waiting on finalized taxable value projections from the Harris County Appraisal District. However, the proposed budget was prepared assuming no change from the FY 2017-18 tax rate of $0.341455 per $100 valuation, City Manager Rob Hauck said.

After three years of little change in sales tax revenue, Tomball expects sales tax revenue to climb to $12.5 million this year, up from $10.85 million projected in the FY 2017-18 budget, according to city information.

“A greater revenue stream means the ability to do more things,” Hauck said.

Magnolia’s proposed general fund budget totals $2.97 million in overall revenue and $2.94 million in expenses for FY 2018-19, a decrease from the previous year’s budget, according to the city’s Aug. 16 preliminary budget.

“Council is always conservative,” Mendes said. “They’re tough on the spending, but they’re also very careful because they realize this is the taxpayers’ money.”

“We’re trying to pick up a little bit more [equipment] to where the public works department is more self-sufficient,” Mendes said.