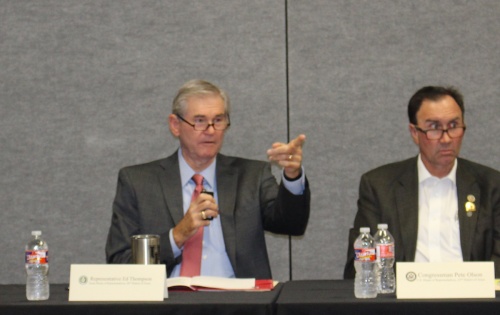 According to Thompson, the state plans on supplying additional funds, possibly from the Rainy Day Fund, to bankroll repairs still needed after Harvey.

"There are a lot of issues that will occur in regards to our schools. A lot of schools were flooded. There is going to be a need to do a lot of reimbursement in that area so I am sure the Legislature will move on the Rainy Day Fund," Thompson said.

While the Rainy Day Fund would go to repairs, some projects, such as the projects planned along Clear Creek, focus on prevention. When asked if the projects on Clear Creek will make flooding downstream worse, Zetterstrom replied they would not.

"The project certainly won't reduce flood risk for every storm event, but for the more likely storm events, it will reduce the flood risk adjacent and downstream of all the elements that are proposed in the channel for the project," Zetterstrom said.

While the projects, funded by the federal government and the recently passed Harris County $2.5 billion bond, will improve Clear Creek drainage, a complete solution on Clear Creek still remains to be seen, Olson said.

"This is great progress, but this is not the end for Clear Creek. This has been going on for almost 50 years now; it's a big, big deal. I lived on the other side of the creek in Clear Lake, but in [Washington,] D.C., we have $400 million to get this thing started. As the Colonel said, it's a start, which makes it better, but doesn't solve the whole problem," Olson said.

While work needs to be done on the creek, proposed projects, including the Coastal Spine, will protect against water and rainfall from future storms, Taylor said.

"We're not talking about spending for one storm, we're talking about building something that is going to last for generations to make a significant impact on this community and frankly upon this country. When you look at the economic impact, the national security implications of what we are trying to protect behind that coastal barrier, it is unquestionable that this is a reasonable and prudent expenditure by the federal government to get this done," Taylor said. "This is a huge thing, and yes, it does work."