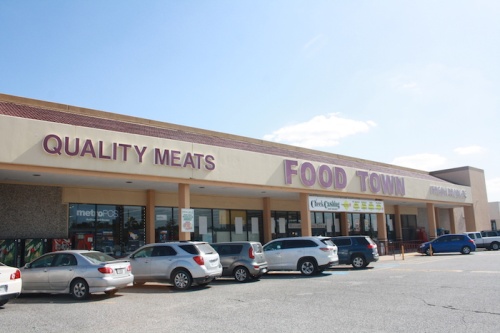 A Harris County commissioner wants to use sales tax revenue to help pay for sidewalks at a Cy-Fair intersection. A Food Town grocery store is among the businesses located at the intersection in question.

A debate over funding for a sidewalk project in Cy-Fair has turned into a conversation about limited purpose annexation that could spill over into the 2019 state legislative session.

In June, Harris County Precinct 3 Commissioner Steve Radack publicly called on the city of Houston and a local freshwater supply district to help fund the sidewalks—estimated to cost between $120,000 and $160,000—at the intersection of Huffmeister and Cypress North Houston roads.

Radack said he wants FWSD No. 61 to chip in using sales tax revenue collected through a strategic partnership agreement with the city of Houston.

SPAs are a form of limited purpose annexation that allow a city to levy a 1 percent sales tax on purchases in an area. SPAs can be executed with a utility district—in this case the freshwater supply district—which collects a portion of the sales tax revenue. More than 200 SPAs are in effect in the Houston area, according to city documents.

“Tens of millions of dollars every year are going to the city, and the [utility districts] are coming out in great shape as well,” Radack said.

However, officials with the district have declined to participate in the project, which has Radack and other county officials looking to the state Legislature for help in changing or repealing the 1999 law that authorized LPAs.

“I think it’s a very poor law that was passed,” Radack said. “Limited purpose annexation leaves a lot of things to be desired, and you’re seeing one right there.”

The push for sidewalks at the intersection gained some momentum when a resident who lived nearby spoke to Harris County Commissioners Court in May about the need for the project, saying they would help residents at area apartments access a Food Town grocery store at the southwest corner.


Radack’s office reached out to FWSD No. 61 in June, saying the county would only consider the sidewalk project if the district agreed to fund 70 percent of construction costs. Officials with the FWSD said they have more critical priorities that need to be funded with that money.

The district’s General Manager Jerry Homan said it has needed to dedicate around $5 million for utility relocations related to the widening of Hwy. 290.

“We’re also in the middle of a $10 million sanitary sewer rehabilitation project,” he said. “We appreciate what [the county] does, but we think we have a better idea of how that money should be prioritized in our district.”

Homan said the partnership was a way to make sure some of the sales tax money stayed in the community. He said the district has partnered with the county on other projects, including pocket parks and the construction of a Harris County sheriff substation, using SPA funds.

Radack said he was not pleased with the district’s decision but recognized it was ultimately up to FWSD No. 61 how to manage its money. He said he has not given up on the project, but indicated it would not move forward until an agreement was worked out.

“This district doesn’t care to participate at this time, and that’s their prerogative,” he said. “Hopefully, people will start putting pressure on them to participate, and we’ll start figuring things out.”

But Homan said demands for his district to help with that particular project feel arbitrary. He said there are other areas within the district that need sidewalks that would benefit more people, citing portions of FM 1960.

Homan said he worries helping with the sidewalk could set a precedent where utility districts are expected to help fund other projects that fall outside their purview, taking money away from other needs.

“Before you know it, we’re in the sidewalk business,” he said.

Limited purpose annexation was made law by the Texas Legislature in 1999, but several efforts have since been made to repeal it. A bill authored during the 2017 legislative session by state Sen. Donna Campbell, R-New Braunfels, sought to, among other goals, repeal LPAs.

The bill—Senate Bill 715—was approved 85-39 by the Texas House of Representatives but fell victim to a filibuster in the Senate on the final day of the session. The bill ended up being passed in the special session as Senate Bill 6 that year, but the language that called for repealing LPAs was not included in the final bill.

However, Homan said without LPAs, his district would likely have to raise its tax rate or take on more debt in order to fund projects.