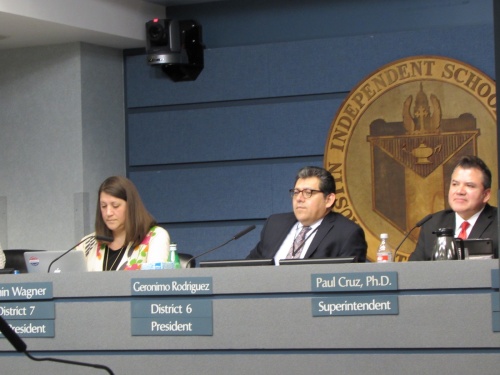 Austin ISD trustees approved a document that outlines its legislative priorities on Aug. 27.

After discussing legislative priorities June 11 and again at a board workshop Aug. 13, the Austin ISD board of trustees unanimously approved a document outlining where the district stands on key issues anticipated at the 86th Texas Legislature next year. The document was approved with the Aug. 27 consent agenda.

Reforming the public school finance system, including the recapture program, was the top priority on this year’s list. According to the district, a new system should be more simple and transparent; the new system should keep all local property taxes in the public education system; it should more accurately reflect the current cost of education; and it should be more frequently updated and evaluated based on current conditions.

Trustee Edmund T. Gordon said June 11 the existing state finance system is “criminal” and that he was “not sure it could get any worse.” He called for districts that are dissatisfied with the system to be more vocal and forthright with their comments to the Legislature in order to demand action.

At a June 11 meeting, Edna Butts, the district’s director of intergovernmental relations and policy oversight, said she continues to have hope the school finance system will be addressed. However, after working through the three prior sessions without much change, she said she is a little more cynical now than before.

“In some ways, [having legislative priorities] does help to bring awareness to subjects, for example, mental health,” she said. “It allows us to tell those [success] stories. We have to keep trying.”

Receiving state funding for campus-based mental health services for students is again a priority on this year’s list.

“[Mental health] is a priority,” Butts said. “We’ve taken Tracy Spinner [AISD assistant director of comprehensive health services] and Dr. Elizabeth Minne to the Capitol to tell [legislators] what we’re doing and to ask that funding be provided. That funding that currently goes to other agencies be directed to school districts because of the wonderful work that we’re doing and the results that we’re seeing.”

Other district priorities include:


The district document also states that it is opposed to legislation that would divert public school funding to private or charter schools, would create a new mandate that is unfunded or infringe on local control, or that would penalize districts that maintain a fund balance.