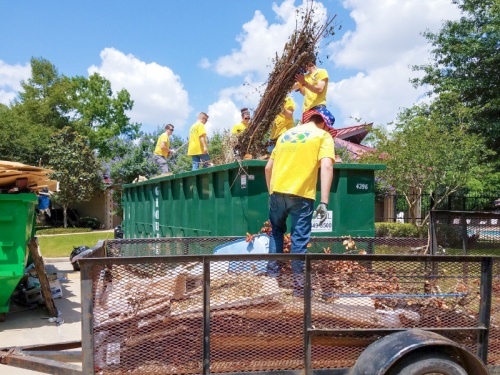 Officials estimate the storm—which landed Aug. 25, 2017—caused $125 billion in losses throughout the county, including 600,000 damaged vehicles and 120,000-180,000 damaged homes, hundreds of which were located in the Cy-Fair area. By the end of 2017, nearly 450,000 county residents had registered for federal disaster assistance, according to a report from the Harris County Office of Homeland Security & Emergency Management.

The Hope Disaster Recovery Network was launched after Harvey to help survivors rebuild across 10 Cy-Fair-area ZIP codes. Executive Director Godfrey Hubert—who also serves as a senior pastor with the Foundry United Methodist Church—said the work is far from over and could be ongoing for the next decade.

“Five thousand Texans are still not in their homes,” he said. “In Cy-Fair, the majority are back in their homes … but when you open the front door you realize there’s no sheetrock. There’s just a portable sink and sawhorses with a door on top serving as a table.”

Hope Disaster Recovery Network, which launched last September, has more than 30 local churches, businesses and other organizations facilitating recovery on a long-term basis.

“In the previous four 500-year floods I’ve been involved with in Cy-Fair, we always would scramble after each flood,” Hubert said. “We would muck and gut [homes], help clean up a little bit, and we wouldn’t know what else to do so we’d move on with life.”

Initially, the group mucked and gutted about 350 homes after Harvey, a process that involves stripping homes down to remove mold. Its 10 case managers have since worked with those who have no flood insurance and have no other resources.

Hubert estimates hundreds of Cy-Fair homes are still in need of having repairs made, and because Federal Emergency Management Agency funding for alternative housing is nearly gone, the network has launched a new campaign called Home at Last to restore 65 homes to pre-flood conditions by the end of 2019.

“It costs about $15,000 to get a home to a safe, secure, sanitary and functional level—one bathroom, a workable kitchen and all the exterior walls and doors sealed,” he said. “That doesn’t include sheetrock through the whole house, flooring—things that finish a home. But it’s livable so kids can go to their own schools and not be in hotels.”

Beyond that, Hubert said it costs an additional $10,000-$12,000 on average to restore a home to pre-flood conditions.

Some local homeowners decided it was not worth staying to renovate. FEMA offered Cy-Fair resident Sharron Whitlock funds to repair her home to livable standards, but she said they were not enough to restore her entire home.

Originally from Miami, the 72-year-old said she moved to Houston in 1981 because the economy was strong and housing was inexpensive. But after dealing with the aftermath of Harvey, she is attempting to relocate and leave the risk of flooding behind.

“Some people—because their homes mean so much and they’ve invested so much here—weren’t willing to move,” Whitlock said. “But it’s not the neighborhood that I moved into. I don’t want to be here anymore.”

Although her home had never taken on water before Harvey, Cypress Creek’s rising waters flooded her house in Windwood, a neighborhood of 76 homes located off Grant Road. She said she is now selling her home for “dirt cheap” to a buyer who intends to flip the home for a profit.

Harvey was also the first time Ian and Trista Rizk’s Bear Creek area home flooded, but the couple said they still saw their property values drop by $100,000. Trista said they were able to move back into their home in July for the first time since Harvey thanks to volunteer crews organized by Hope Disaster Recovery.

Before Harvey hit, the Rizks were preparing to put their home on the market. Now, they are simply looking to bring normalcy back to their lives.

The passing of a $2.5 billion bond referendum on Aug. 25 would provide more money for voluntary home buyouts for homes deep in the floodplain, including $187 million along Cypress Creek. However, the Addicks Reservoir watershed, including the Bear Creek area, would not receive any buyout funding.

Although his Lakewood Forest home had never flooded before Harvey, Daren Neely, teaching pastor at the MET Church on Jones Road, said he remembers sitting in 18 inches of water and calling the church to send a boat for him, his wife and their three children.

With the help of volunteers and the generosity of strangers, the Neely family was back in their home by Christmas. But the recovery process did not end there.

“We still have these moments of despair about the whole thing,” Neely said. “It didn’t just go away because I’ve got floors and walls.”

When Harvey first hit, Neely said he was excited about the prospect of being able to say he survived a hurricane. But once the reality of the situation sunk in, he displayed symptoms of depression and anxiety.

Soon after the family moved back home, the church sent Neely and his wife to couple’s counseling to process all that happened to them. He ultimately began seeing a counselor once a week on his own and sharing his experience in a weekly video series on Facebook.

Neely said he has connected with other people on social media who are coping with the same trauma.

“I knew how it was affecting me, and I started looking around and thinking about how many people around me are dealing with this the same way or even worse,” he said. “Who knows what’s going on in these homes where people are living upstairs or in hotel rooms with four or five kids?”

An April report from the University of Texas Health Science Center at Houston found that 18 percent of Harris County residents were experiencing serious psychological distress four months following Harvey. That number significantly increased for those whose homes and vehicles were seriously damaged—48 percent and 37 percent, respectively.

Local nonprofits such as Cy-Hope and Shield Bearer offer counseling services for those who were psychologically affected by Harvey.

Shield Bearer Executive Director Roy Wooten said the nonprofit has helped more than 200 people through its “Hope After Harvey” workshops and has seen a 48 percent increase in the number of new cases since last fall.

He said although Harvey did not flood every home in Cy-Fair, the hurricane exacerbated issues for many.

“I think of recovering in waves, like the waves of an ocean,” he said. “We get hit with a wave, and we’re angry or reserved and run away or hide in some way. And then we feel ourselves getting better, and we think it’s all over and the wave’s going away, but it will come back and hit us in the face again. Over time, the waves come less and less frequently, but they’ll still happen.”

Since Harvey the congregation at Shine Bible Fellowship Church has served more than 110 families—mostly living in the FM 529 and Hwy. 6 corridor, Lead Pastor Jaron Jones said. Church members have been a part of the recovery process from the beginning, and the work of painting, repairing fences, doing yard work and installing air conditioning units continues today.

But Shine Bible Fellowship Church’s interactions with these families do not end with the physical labor. Jones said members have followed up with survivors through Thanksgiving dinners, summer block parties and events to celebrate the work that has been done while raising awareness about what is left to do.

“When we go out, a lot of people feel like they’re not talking about [Harvey] in the news anymore, so people assume everything’s OK,” he said. “It’s comforting for them to know they haven’t been forgotten.”

Additionally, businesses can volunteer to provide services as the recovery process continues, he said.

“An electrical company can give us one person for one afternoon a month,” Hubert said. “If we all share the load that way, then it becomes manageable. We get the great satisfaction of having done something for humanity, and we aren’t overwhelmed by it.”

In Neely’s neighborhood, many residents vacated their homes and never returned, but he said most families decided to stay and rebuild.

“I look at our neighborhood now and see more conversations going on out in the street, people borrowing things from each other, helping each other out,” Neely said. “That kind of stuff never would have happened before. It’s been this event that really did bring our little section of the city together.”