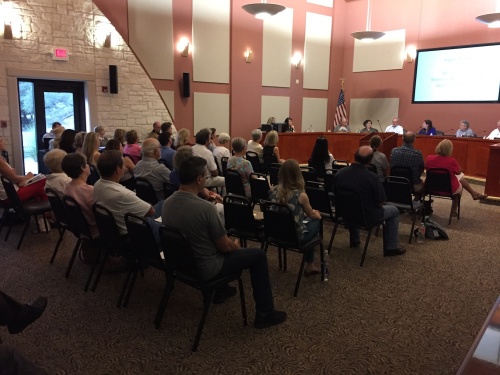 Lakeway’s Wildlife Advisory Committee discussed the future of its deer management plan Aug. 9, at which time the body recommended a temporary pause on its Trap, Transport and Process program for an unspecified amount of time.

The trap program was a city initiative that sought to control Lakeway’s deer population and donated the resulting meat to nonprofit charities. Over the past several months, city officials have heard from many residents both for and against the controversial program but ultimately decided to halt its operation for one year, until Aug. 20, 2019.

The decision comes in the wake of an ongoing residential debate about the ethical implications regarding the city’s deer population control methods. But the public outpouring Monday night was more one-sided, as several people voiced their concerns about cruelty toward the animals.

During discussion of the agenda item, several attendees pleaded with city officials to either suspend or end the program.

Nikki Prather, a state director for the Humane Society of the United States, addressed the council and said the program is neither humane nor effective for the management of wildlife.

“Just because a control method reduces the population, that doesn’t mean that it’s justified, ethical or appropriate,” Prather said following her request that the council uphold the Wildlife Advisory Committee’s recommended suspension of the trap program.

Other citizens addressing the City Council implored the body to get more data before making a decision affecting wildlife control policy.

Lakeway City Councilmember Dwight Haley agreed that more data is needed before the city moves forward with another plan and requested those wanting an end to the program to attend wildlife committee meetings.

“I’ve talked to two or three wild game biologists… and all of them told me they thought it was very important for Lakeway to back up for a while,” Haley said.

City leaders need to gather accurate information pertaining to the deer population, as well as establish an effective dialogue with the citizens of Lakeway, Haley said.

“The reality of it is there has been very little communicating going on within this framework of this city on the deer, and we really need to focus on that,” he said.

CIty documents state that $43,950 of the fiscal year 2019 budget had been earmarked for its deer management program, the bulk of which was reserved to pay for the program.

In the coming months city officials will discuss more specifically how to proceed with data gathering and citizen engagement regarding the Lakeway deer population.

In other city council activity:


New boat docks are no longer restricted by 100-foot rule

Boat owners in Lakeway may now set up new boat docks a little closer to each other.

City Council removed a 2011 city code amendment stating that “new boat docks shall not be permitted if they will be [located] less than 100 feet from existing boat docks.”

The adjustment in 2011 was meant to address overcrowding during times when lake levels are low, according to city documents.

Other provisions within the city code already sufficiently address overcrowding in the lake, City Manager Steve Jones said. The motion to remove the amendment passed unanimously.

A representative for SpawGlass, a contractor building the new Lakeway Police Department facility located on an extension of Lohmans Spur Road off Lohmans Crossing Road, reported that the project is 56 percent complete and on pace to be completed by early 2019.

The 31,000-square-foot, $23 million facility will contain space for police administration, patrol, dispatch, criminal investigation divisions and support services as well as a training room, staff and building support, property and evidence rooms, and temporary holding and exercise-training areas, according to city records.

Voters approved the building project in May 2017.