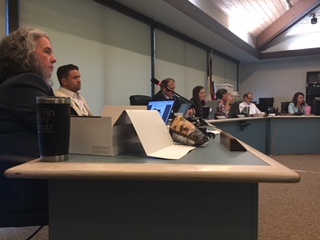 As the Oct. 1 fiscal year 2018-19 renewal date nears, Rollingwood City Council members blazed through another budget workshop with the most prominent theme being talk of restructuring.

Discussions and budget requests ranged from street repair to city rebranding to the digitizing of city records, but the discussion with the biggest dollar signs centered on what to do about the ongoing space issues at the Rollingwood City Hall building.

Alderman Gavin Massingill discussed the possibility of allocating $300,000 from the city’s $755,000 reserve fund to renovate the City Hall building to add office space.

“As part of that discussion, and during our current budget writing process, we are focused on long-term planning and whether or not to allocate a portion of our reserve fund balance to begin developing a more comprehensive facility plan,” Massingill said.

Concerning a facility plan, Mayor Roxanne McKee talked about the possibility of utilizing money from the reserve fund toward architectural and engineering services for construction planning.

One possible plan calls for an approximate doubling of space for the city facility to about 8,500 square feet. That kind of fix could alleviate many of the city government’s growing pains, but McKee stressed budgetary expenditures are still just in the talking phase and a project of that stature would require substantial citizen input and buy in.

“Potentially, if you had a $4.2 million build, then you’d be looking at architectural and engineering service costs of approximately $315,000,” McKee said, adding that figure is roughly 10 percent of the construction costs.

A rebuild for the Rollingwood city facility could potentially turn the city council chamber into a dual-community purpose room, among other structural changes, McKee said.

Massingill said one or the other or neither or some combination of the two options are in play right now.

“It’s my hope that we will come to a preliminary conclusion to provide for some portion of initial planning funds, but either way, we have a long way to go and a great deal of community input to receive before a final decision is made,” he said.


Other proposals during the budget workshop included:

$60,000 for drainage issues
$40,000 for Rollingwood Police Department records management
$25,000 for improved and expanded walkways and trails for the city’s parks
$5,000 for the digitization of city documents

A City Council memo states that the proposed ad valorem tax rate raises $142,715 more in revenue from property taxes than last year’s rate, $77,859 of which is from new property added to the tax roll this year.

City Council will decide on when to set its official 2018-19 tax rate at its Sept. 6 meeting, City Administrator Amber Lewis said.