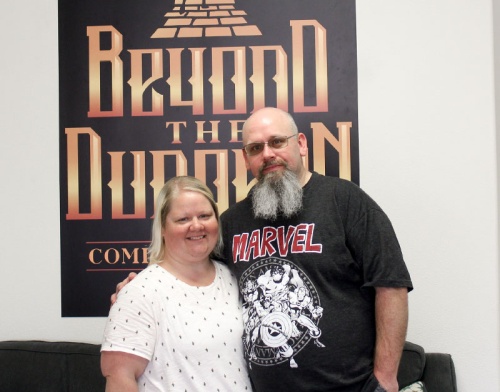 Amber and Jesse Smith opened Beyond the Dungeon in August 2017.

From the rise of publishing giants like DC and Marvel Comics to the birth of web comics in the digital age, the comic book industry has changed significantly over the years. However, one aspect has held its ground—local comic book stores remain an important place for those who still enjoy old-school purchases, said Jesse Smith, owner of Beyond the Dungeon Comics and Games. .

“People want to talk to their local comic store guy—even if he is a strange, brooding old dude,” he said. “They really [want] their friendly local comic book store.”

Beyond the Dungeon is a comic book and game store that opened last August in Spring. In addition to selling a variety of comics and gaming supplies, the store hosts tournaments for competitive gamers.

The comic books explore a diverse range of topics, including societal issues such as mental health, said Amber Smith, Smith’s wife and co-owner of Beyond the Dungeon.

“I never read a comic book until we opened. I always thought they were … about superheroes,” she said. “What I find interesting is they’re about everything.”

On the gaming side, the store offers board and card games as well as tabletop role-playing games, where players describe their characters’ actions through speech. Some of the most popular events include Dungeons and Dragons and Magic: The Gathering tournaments, which attract an average of 16-20 people, Jessie said.

The Smiths said they plan to continue to grow the business by listening closely to customers and making choices to reflect those wants.

“Everything we purchase, every new line we expand to, is completely community-driven,” Amber said.