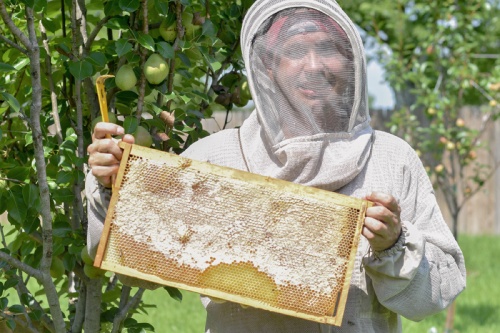 After years of beekeeping in his spare time, Cy-Fair resident Jake Lavine found a way to turn his hobby into a way to make a living.

Lavine, formerly an accountant, has been beekeeping for the past six years but officially launched his business, No Bee Left Behind, at the start of 2018.

The business involves both the removal of bees—mainly from residential properties—and the harvesting of honey, which Lavine sells on the weekends.

In the beginning, Lavine said he performed bee removals for free, resettling the bees to a host of five beehives that he maintains in Cy-Fair. After building his hives from the captured bees, Lavine said he slowed down on removals.

Although Lavine said he still performs one to two removals a week, he said the main focus is now on beekeeping. Today, he maintains an additional 30 hives on a local farmer’s land in Pattison, Texas, he said.

Lavine said he spends up to six hours or more every day maintaining the beehives, including cleaning them, checking on progress, removing sick bees and harvesting honey.

At his honey stand, Lavine said he sells both beehives and honey he bottles himself. He said he uses the business Facebook page to provide updates on where and when honey will be sold.

Each bottle of honey is made by straining the honey through a cheesecloth one time to preserve the flavor and pollen in each batch without adding other ingredients, he said.

Some beekeepers and honey vendors who harvest on a larger scale dilute honey with heat, mix batches and water it down to prevent fermentation, Lavine said. He said he only feeds his bees honey and does not use chemicals for treating illness to avoid potentially affecting the honey.

“We keep it at such a minimal amount of exposure,” he said. “To strain honey, it takes a long time, especially when it’s really thick.”

Although Lavine said he would like to hire more workers, the process of selling honey, socializing with other beekeepers in Texas and maintaining the beehives has proven to be a worthwhile one-man job, he said.

“Most of the funds that I make go back into the bees,” Lavine said. “People come by and say they always wanted to help the bees. Well, you’re helping because you’re supporting the local beekeepers.”