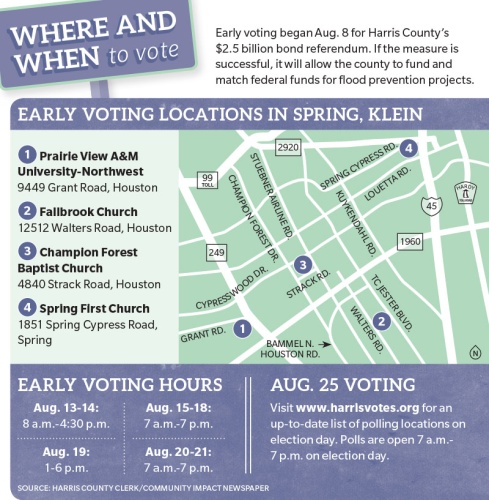 Voters on Aug. 25 will decide whether to approve $2.5 billion in bonds for flood prevention in Harris County, including projects in the Spring and Klein area.

Early voting for the referendum is held through Aug. 21.

If the referendum is successful, it would mean an increase of about $5 in the 2020 tax bill of a resident who owns a house valued at $200,000, Harris County Budget Officer Bill Jackson said. That amount will increase over a 15-year period to $50 in 2035, he said.

The Harris County Flood Control District tax rate will double by 2035 if the referendum is successful, increasing by a total of 3 to 3.5 cents per $100 valuation, Jackson said.

If successful, the referendum will provide $868 million for a local match to obtain $3.2 billion for projects for flood prevention projects, HCFCD Chief Operations Officer Matthew Zeve said. The remaining money will boost HCFCD’s annual budget from $120 million to approximately $500 million annually for up to 15 years as well if all of the HCFCD’s grant applications are approved, he said.

HCFCD announced the final list of projects in the bond program Aug. 6 at www.hcfcd.org.

The Cypress Creek watershed, which covers most of Spring and Klein, could receive $100 million for right of way purchases along the creek, which Zeve said will expand the unoccupied areas of the flood plain.

“If the flood control district purchases the right of way, it can’t be developed, and we can either leave it as natural flood plain … or we can make it part of a park system, or we can potentially design and construct a regional detention basin,” Zeve said.

Other projects HCFCD could pursue in the Cypress Creek watershed include $60 million for maintenance of the creek and tributaries and $25 million to construct stormwater detention basins. Other anticipated regional projects include $30 million for right of way acquisition along Willow Creek.

The referendum does not include money for a third Houston-area reservoir along Cypress Creek, as that would be a U.S. Army Corps of Engineers project, Zeve said. However, the bond program will likely include funds to study potential locations, he said.