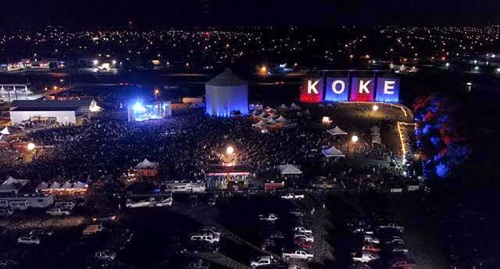 The city of Hutto and KOKEFEST organizers announced they have paused the music festival and evacuated the concert grounds due to inclement weather concerns.

Update 8:26 p.m.: Officials have canceled the remainder of KOKEFEST events tonight due to unsafe conditions, per a Facebook post from the city of Hutto.

The festival was previously delayed due to heavy rain and lightning and those weather conditions are expected to continue into the night.

Update 6:15 p.m.: KOKEFEST activities are paused until at least 8 p.m., per Hutto officials.

Original post: The city of Hutto and KOKEFEST organizers announced they have paused the music festival and evacuated the concert grounds due to inclement weather concerns.

Officials made the decision after identifying a weather cell west of the KOKEFEST concert grounds. Some concert goers are currently in sheltered areas at the site. Patrons are additionally encouraged to seek shelter in their vehicles or in the provided shelter buses.

"We are watching the storm cell and will restart the Festival as soon as it is safe to call an all-clear,” said Lise Hudson, Market Manager of Austin Radio Network in a news release.

The remainder of KOKEFEST has not been canceled at this time, per City of Hutto Public Information Officer Eliska Padilla. City officials and festival organizers stated updates on the weather delay will be given in approximately 45 minutes.