GCISD board selected as finalist for Outstanding School Board 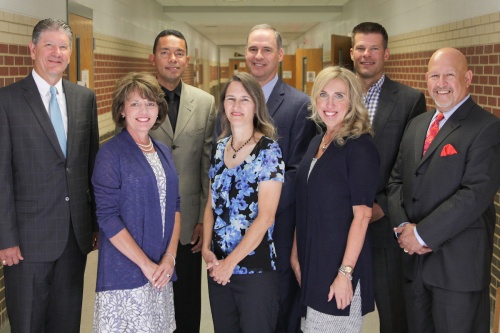 The GCISD board of trustees was named a finalist for Outstanding School Board.

The Grapevine-Colleyville ISD board of trustees has been named as one of five school boards across Texas as a finalist for Outstanding School Board in the 2018 Texas Association of School Administrators School Board Awards.

The program recognizes outstanding Texas school boards for commitment and service that have made a positive impact on Texas public schools, according to a news release. The GCISD board was named an Honor School Board along with four other boards: Brenham, Community, Lamar and Medina Valley ISDs. These boards will be interviewed at the TASA convention in Austin, and the winner of the Outstanding School Board will be named during the convention on Sept. 29.

“The Grapevine-Colleyville ISD board of trustees has a shared vision that embraces diversity and strives for excellence for all,” Amy Jacobs, who serves as chair for the committee that selected the Honor Boards, said in a statement. “Board members encourage district staff to step out of their comfort zones and personalize education for every student.”

GCISD Superintendent Robin Ryan nominated his board for the award. Ryan himself has been named Regional Superintendent of the Year by a panel of school board members.

“I am privileged to work with this board as we work to empower and educate students to become productive citizens,” Ryan said. “I know that our 'Team of Eight' works as a team built on trust, respect and common goals. I also know that the first priority of every one of our board members is doing what is best for students.”