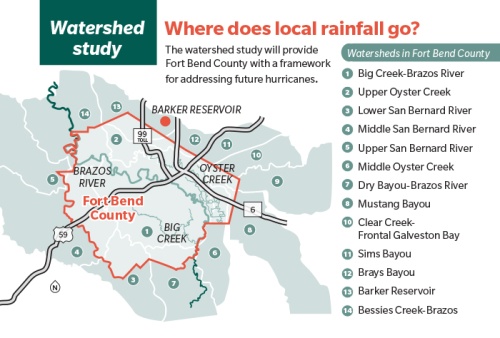 Fort Bend County Commissioners Court approved the continuation of a countywide, 18-month-long watershed study in June, which will give the court a framework for developing a long-term bond program to fund improvements and prevent losses from future Hurricane Harvey-like storms. The county’s streams, creeks, bayous, drainage districts, levee districts and infrastructure within the watershed will be studied.

According to Mark Vogler, chief drainage engineer and general manager of the Fort Bend County drainage district, one major point of concern in the Sugar Land and Missouri City area is the Brazos River, which reached an all-time record high after Harvey at 55.2 feet—0.8 inches below the 100-year flood elevation level.

“We need to understand those dynamics because we do have this big river running right through Fort Bend County. It doesn’t divide us, but it bifurcates [around] us,” Fort Bend County Judge Robert Hebert said in a legislative update in June.

Hebert said the next step in the process is to create a Brazos River flood plain master plan, which will determine whether the county uses a levee or a fill in regard to developing within that flood plain and not affecting other properties by raising the water level.

“We’ve discovered some critical flow rates that start to create a worse problem by exacerbating the amount of sand erosion at the bottom of the river because of the velocity of the flow,” said Chris Steubing, Sugar Land assistant city manager.

In addition to the flood plain master plan, Hebert said the Commissioners Court will update effective flow boundaries, determine effects from loss of flood plain storage and compare Harvey to previous record floods in Fort Bend County. Eventually, this will lead to the development of a two-dimensional model of the river extending just south of Hempstead to the county line shared by Brazoria and Fort Bend counties.

“We want to go all the way out to Hempstead because everything that’s coming into the river below Hempstead comes through Fort Bend County,” Hebert said. “We want to advance more into our model as to how that works. There’s some indication that some of our data that we’ve been using for many years may be flawed because we’re not seeing the flows, but we see the elevation of the water in the upper reaches of the Brazos.”

The city of Missouri City had about 336 commercial and residential properties damaged from Harvey, either by flooding or tornado damage, said Scott Elmer, Missouri City assistant city manager. The city’s extraterritorial jurisdiction in Riverstone and Sienna Plantation also had about 200 properties that were damaged.

“The big issue that happened in Harvey was not rainfall on top of the city, although that was still major, but the fact that the Brazos River was at high water levels, which prevented our drainage ditches from draining,” Elmer said.

While Missouri City was not hit as hard as other cities in the Greater Houston area, Harvey affected the city in a different way. Missouri City City Manager Anthony Snipes said the city received about $1.9 billion in property tax protests, which he concluded were attributable to Harvey.

“Missouri City residents saw enough of their neighbors, friends [and] family with significant damages and decided after 20 or 30 years, they wanted to protest their property taxes,” Snipes said. “We depend on sales and property taxes, so when values decrease or increase, that has an impact on the city.”

Steubing said the city has several requests through Fort Bend County to the state for federal funding. No responses or approvals will be released until August of this year, he said.

The plan is broken up into two phases—a five-year plan and a 10-year plan—the first costing about $40 million and the second costing an additional $40 million. Steubing said the city of Sugar Land hopes to start the necessary construction in fiscal year 2019-20.

“We can’t take it all on at once. It has to be spread out or else it’ll tear apart at least one-third of the city with construction if we did it all at one time,” Steubing said. “The five-year program was reshuffled based off of [a] master drainage plan policy that lets us compare projects on an apples-to-apples comparison.”

Long-term mitigation efforts for Missouri City include installing rain gauges and flood monitoring for the city and properties in its extraterritorial jurisdiction, as well as working with Fort Bend County on the Brazos River studies, Kumar said.

Steubing said he and the rest of the city government staff has learned a lot from this study and believes it will make them better at serving the community.

“We’ve had good progress and a lot of attention on this subject, which is good because citizens are caring about this,” he said. “We’ve learned a tremendous amount of information, which has intrigued us into delving deeper and seeing how we can make our residents more aware of what’s going on and what to do in an emergency situation. This study puts us in a better position to predict and monitor the river and inform the county about what needs to be done.”