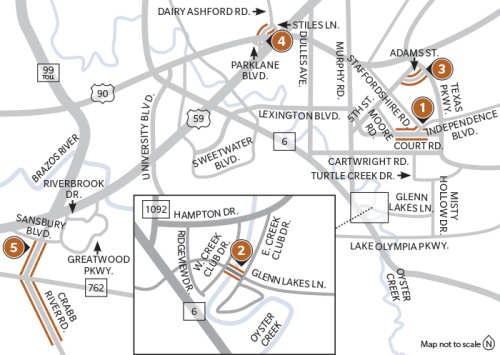 Court Road in Missouri City has closed between Moore Road and Staffordshire Road to begin the reconstruction of Independence Boulevard Segment 1 from a two-lane concrete roadway into a four-lane divided roadway. The road will be realigned to meet the intersection of Staffordshire Road and Independence Boulevard. Court Road is expected to remain closed until the end of 2018, according to a news release from Missouri City. Traffic control devices are set up, and residents should expect traffic delays during construction.
Timeline: July 2018-June 2019
Cost: $4.5 million
Funding sources: city of Missouri City, Fort Bend County

The project to reconstruct Adams Street in Missouri City and install new sidewalks between Texas Parkway and Fifth Street continues, and residents may experience traffic delays as construction work continues. The intersection at Kimberly Lane and Adams Street is now open to traffic in both directions, according to a citywide news alert.
Timeline: October 2017-October 2018
Cost: $2.4 million
Funding source: city of Missouri City

All information on this page was updated as of 7/18/18. News or questions about these or other local transportation projects? Email us at [email protected].