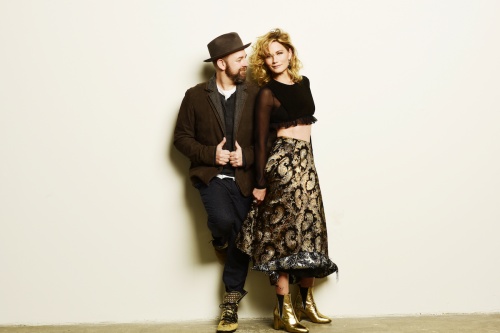 Grammy Award-winning duo Sugarland is making a stop in Sugar Land at The Smart Financial Centre July 21 during their "Still The Same" tour promoting their latest record, "Bigger." Frankie Ballard and Lindsay Ell will join the lineup, and tickets can be purchased here.

Duo members Jennifer Nettles and Kristian Bush both released critically-acclaimed solo albums during the group's hiatus. "Bigger" marks their first new album in eight years. Since the band's inception in 2002, Sugarland has sold nearly 10 million albums in the U.S., garnered seven No. 1 singles to date and amassed more than 260 million on-demand streams, according to a press release from BB Gunn Press.

Bush and Nettles co-wrote nearly all of the songs on the new album in about nine days spread out over about two months, Bush said in an interview with Community Impact Newspaper.

Community Impact: What is the story behind the name Sugarland?
Kristian Bush: Originally, there was one of the ladies who was a resident—I asked her, ‘Where are you from?’—she said, ‘I grew up here in Atlanta, but I’m originally from Sugar Land.’ She didn’t [specify] where that was and it kind of hit my ear funny. I remember thinking to myself that day, I kind of want to be from there. I went home and I started writing a song the next morning and it was "Sugarland," the song … That was it, I mean it was kind of a combination of a bunch of bad things that had happened in my life at the time—my mother had passed away, I had just turned 30 and they had flown those planes into buildings. Things were bad. I needed something that wasn’t bad. I needed a good thing, so [Sugar Land] sounded like a place I wanted to be from. That was the first song Jennifer [Nettles] sang for me when she came in to see if she wanted to be a part of this.

CI: Have you played in Sugar Land before?
KB: We played the steps of City Hall when it was brand new. I always love it when people come up to me and they’re like, ‘Hey, I’m from Sugar Land.’

CI: Can concertgoers expect anything special for the Sugar Land performance?
KB: The show itself there will be a really exciting one. One of my best friends and managers is from Houston, so that’s a homecoming of sorts. I would say, I don’t think we’ll be able to escape making that show super special. It’ll have to be.

CI: How has it been getting back out on tour as a duo?
KB: It’s been pretty great. There’s a lot of that missing your old friend type of situation. That’s really fun whenever you reconnect with somebody you haven’t seen in a while, everybody knows that feeling. It really is special. It’s like a comfortable place because you trust someone and you’ve been through so much together but then there’s also this new energy because we didn’t really talk much for like 5 years.
SHARE THIS STORY