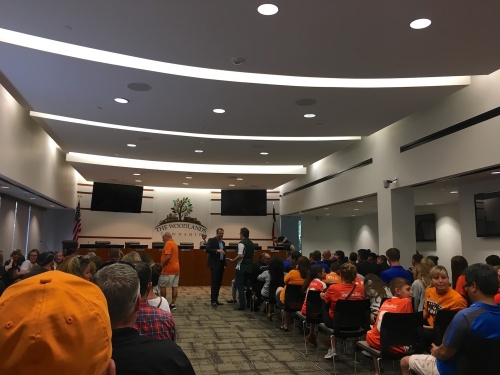 Following a lengthy public comment portion of last night's board of directors meeting, The Woodlands Township will keep its original agreement with Texas Rush Soccer Club.

Several families have spoken during public comment over the past few weeks and alleged that a memorandum of understanding between the Texas Rush Soccer Club—also known as Dynamo Dash Youth—allowed an unfair monopoly on fields owned by The Woodlands Township at Bear Branch and Gosling parks.

During the board of directors June 27 meeting, Township Chairman Gordy Bunch proposed an amendment to the agreement removing a requirement giving Texas Rush approval over other organization wishing to use the fields for more than 50 hours per year and changing a termination date to align with the yearly soccer schedule.

“We have met with Rush Soccer and negotiated the proposal I submitted, that eliminates the 50-hour rules and allows a field that’s not being used to be used by somebody,” Bunch said. “There’s upwards of 1,700 familes that currently participate in Rush that are residents of The Woodlands. [To cancel the contract] would be highly disruptive to 1,700 families in the community."

However, the measure received a 2-2 vote and failed to pass for lack of a majority. Directors Brian Boniface and Bruce Rieser were absent during the meeting and Director John McMullan recused himself from the item.

“I’ve met with people from both sides. I hear the concerns of wanting more,” said Director Ann Snyder, who voted against the amendment. “But there is a process to be a qualified sports entity in our community, and I don’t believe that those other clubs [are]. We’ve had a longtime relationship with Rush.”

Parks and Recreation Chris Nunes confirmed many organizations applying for field use did not meet one or more of the requirements to become a qualified sports entity, which include that at least 60 percent of participants be residents of The Woodlands, submit current financial statements and provide a minimum of $1 million in liability insurance.

Bunch said the township is working to identify where more fields can be constructed to provide more space for sports organizations.

“This isn’t just a soccer issue,” he said. “The lacrosse teams are growing; the rugby teams are growing—we have a lack of sports fields issue. We’re at 95 [percent and up] field utilization. We’re doing the best we can with the fields we have and we are looking to expand those sports complexes and that might relieve pressure on field use.”
SHARE THIS STORY