Greater Magnolia area strives to be friendly to commuters 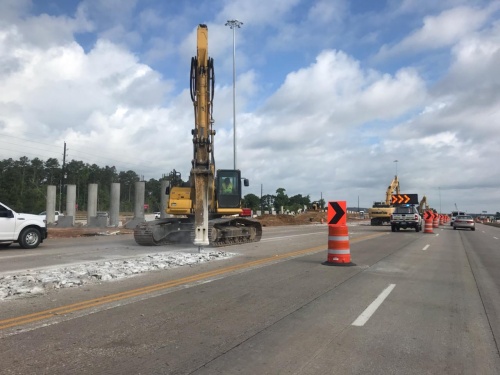 Officials with the city of Magnolia and Montgomery County said the Greater Magnolia area is in the midst of transforming from a small town into a commuter hub as the population continues to swell throughout the Greater Houston area, trickling up Hwy. 249 into Magnolia.

While the U.S. and Texas average for commute times to work was about 26 minutes in 2016, residents in Magnolia ZIP codes 77354 and 77355 reported commuting more than 35 minutes to work, according to U.S. Census Bureau data. Additionally, Pinehurst residents reported an average commute of about 45 minutes in 2016—a 17-minute increase from the average commute time in 2012.

“A lot of people want to see Magnolia remain this small-town community that it is,” Montgomery County Precinct 2 Commissioner Charlie Riley said. “I want it to stay that way to a certain extent. I do not ever want Magnolia to lose that charm.”

Cutting commute times
Commute times are a big issue in Montgomery County because many residents work outside the county, Riley said. According to census data, 63 percent of residents in Pinehurst and Magnolia ZIP codes worked outside of their county of residence in 2016.

Chuck Adcox, vice president of the Magnolia ISD board of trustees and a pharmacist at Cardinal Health—located in the Energy Corridor between Beltway 8 and the Grand Parkway, said the completion of Grand Parkway segments F-1, F-2 and G in 2016 reduced his commute by allowing him to bypass the congestion on Hwy. 249 in Tomball.

Multiple ongoing projects could help cut commute times as well, Riley said. He said he believes the completion of road projects along Hwy. 249, FM 1774 and FM 1488 are necessary for the advancement and expansion of the community.

“My idea of improving the quality of life is by getting people from here to where they have to go every day and back in a reasonable amount of time,” Riley said. “You can’t do that right now.”

Crews in Montgomery and Harris counties as well as the Texas Department of Transportation are expanding the tolled portion of Hwy. 249 through Montgomery and Grimes counties by 2020. TxDOT is also widening a portion of FM 1774 and FM 1488 as well as adding railroad overpasses in Magnolia. Construction on the FM 1488 overpass is expected to wrap up in the third quarter while the other projects will wrap up by late 2019.

“We will see a dynamic change in the ability to get to and from Houston and points north of us,” said state Rep. Cecil Bell Jr., R-Magnolia. “That is big—not only for our community—but for Texas to have the ability to move north and south.”

Incoming development
Local officials said they hope the expansion of roadways will entice developers to not only build more residential communities but to also bring more jobs and entertainment, shopping and dining options.

“We have thousands of acres of beautiful land up here,” Magnolia City Administrator Paul Mendes said. “When I first [arrived] almost 10 years ago, I talked with some developers. I asked why they do not do something with this property. Their response was when we could get people from their homes to their jobs in Houston, [they] would do it.”

Several developers are designing master-planned communities slated to break ground pending the completion of nearby roadway projects, Mendes said. A number of the developments may include commercial properties, which will bring more shopping, dining and entertainment destinations, he said.

“You could not buy a pair of jeans in Magnolia a few years ago,” he said. “That enhances the quality of life of everyone when you are able to address your basic needs without having to drive 20 miles to do so.”

In April, Audubon Magnolia Development, a master-planned community slated near FM 1488 west of FM 149, announced plans to triple the size of its proposed mixed-use community in the Greater Magnolia area. Mendes said this is estimated to be the largest development in the area, totaling nearly 3,300 acres with 5,000 homes as well as retail options. The project is slated to break ground next year.

Additionally, once TxDOT crews complete the FM 1488 widening and overpass project near FM 149 in the third quarter of this year, construction is slated to begin on a new H-E-B grocery store near Spur 149 and FM 1488, Mendes said. The location is expected to be complete by November 2019. This development also may include a movie theater, coffee shop, home improvement store and townhouses, he said.

Tana Ross, Magnolia’s economic development coordinator and planning technician, said all of the available land in the city’s trade area— a 7-mile radius from the city’s center—has been unofficially claimed by developers, which totals more than 20,000 acres.

“There are plans for every area,” she said. “These developers know that the roadways are going to open all that green space up.”

A commuter economy
While some residents fear the incoming development may cause the area to lose its small-town charm, Riley said the Magnolia community has historically benefited economically through access to faster and more reliable means of transportation into major trade hubs.

After the Union Pacific Corp. railroad cut through the city in 1901, local residents used the opportunity to ship their crops and products more quickly, according to “Magnolia Memories,” a historical collection by Celeste Graves.

Back then, Magnolia was a little railroad town, Mendes said. The railroad spurred economic development, and the town relocated to its present-day site to have more convenient access to the railroad.

Today, Mendes said he believes the city and surrounding area is becoming a commuter town whose residents normally work elsewhere than where they live, eat and sleep.

“It is becoming more and more like a bedroom community,” he said. “For a while, it was a family community. Many of the folks who raised their families here are still in the community. Now, their kids are coming back.”

In Magnolia, most businesses within the two ZIP codes are among the construction, professional, service, accommodation and food services, and retail industries, according to 2016 census data. However, the majority of these establishments are small businesses, which employ 99 or fewer people.

Bell said he expects to see more construction and construction-related jobs in Magnolia over the next eight years.
In addition to existing large employers—such as Magnolia ISD with 1,774 employees and Montgomery County with 2,629 employees—Ross said larger companies are considering opening new facilities in the Magnolia area.

Although details have not been released, Ross said two companies are planned for the Magnolia Business Park.

To improve the quality of life and bring more jobs, Montgomery County must continue to invest in infrastructure systems and services, such as new roads, utilities and emergency response services, Riley said.

“The growth has to happen because we need more industry in Montgomery County to give the homeowners some tax breaks and relief,” he said. “The more industry we have, the lesser the burden on homeowners.”