Salaries, taxes and start times: 3 takeaways from the Pearland ISD board meeting 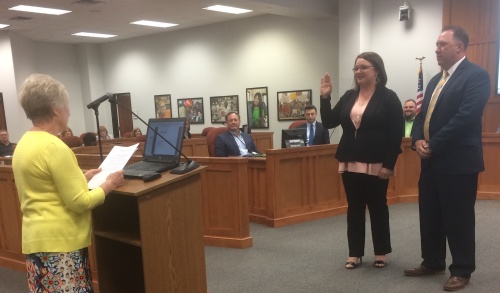 Trustees Crystal Carbone and Sean Murphy were sworn in at the May 22 board meeting.

The Pearland ISD board of trustees on Tuesday approved raises for teachers and set a meeting to discuss its tax rate.

The board also began the discussion on changing school start times, but assured the district that no changes will be made this year.

The board also swore in trustees Sean Murphy and Crystal Carbone. Carbone is replacing Pam Boegler, who is stepping down after serving as a trustee with the district for eight years.

Here are the things to know from Tuesday's meeting.

The board voted unanimously for a 3 percent raise for teachers during the 2018-2019 school year.

“I’m all in favor for a three percent raise for the teachers,” Trustee Lance Botkin said. “There is a couple things that I will not sit up here and sacrifice, and that’s teachers and staff … and safety and security of our kids.”

The board has set June 12 for a public meeting to discuss the current tax rate of $1.4156, which is a combination of a $1.04 maintenance and operations tax rate and a $0.376. The board will not be going out for a tax ratification election, which had been an option discussed during budget workshops this year.

Start times for the 2018-2019 school year will stay the same. However, the board of trustees will continue to look at school start times and potentially make a decision in the future, affecting the 2019 school year.
SHARE THIS STORY