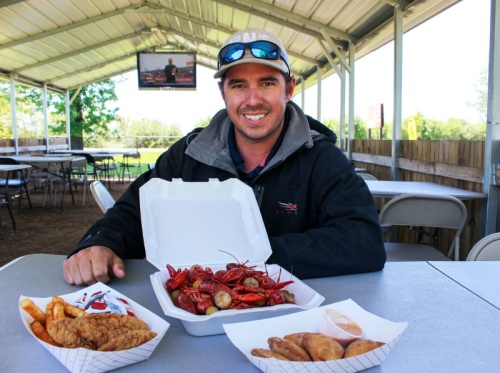 Chances are that on any typical sunny Saturday, Nathan Nalesnik, owner of Big N’s BBQ and Crawfish, can be found cooking crawfish and slicing brisket out of his permanently parked food truck off Katy-Hockley Cut Off Road.

“When it was very nice at the beginning of April, you couldn’t sit out here,” Nalesnik said. “People [were] eating on their tailgates, crawfish, because they wanted them so bad.”

“We are starting to see people come from Columbus and Sealy,” Nalesnik said. “We had people from Austin here last weekend.”

Big N’s specializes in crawfish and also sells barbecue, such as brisket, ribs, chicken and sausage, and kids’ food, such as chicken fingers and hot dogs.

“We are probably the cheapest place in Katy for crawfish,” Nalesnik said.  “We are $5.50 a pound—I don’t anybody in Katy cheaper than that.”

Nalesnik said because he only has so much space out of his truck to cook and sell food, Katy residents need to be sure to get their fix of Louisiana crawfish before supplies runs out. The truck is open on the weekends in the spring and early summer.

“When we cook, we cook X amount of brisket for the day, and when we run out, we run out,” Nalesnik said.

Picnic tables are sprinkled around the open dirt and grass lot, which also boasts a covered tent area with more tables and a TV, a bounce house for kids to play on and outdoor games such as horseshoes. Customers are also allowed to bring their own beverages.

“On a Saturday there’s normally like a little baseball game, whiffle ball game over here,” Nalesnik said. “And everybody just hangs out.”

While Nalesnik has never worked in a restaurant, he said he learned how to barbecue and cook crawfish from working on the barbecue cookoff committee for the Houston Livestock Show and Rodeo, where he cooked alongside pit masters for five years.

“I took a little bit of advice from everybody and put it into my own and just ran with it,” Nalesnik said.

Nalesnik runs his landscaping company, Nalesnik Landscaping, out of the back of the same property. He said he tries to give back to the community that has helped his side-hustle-turned-successful-small business by catering charity events and nonprofits.

Nalesnik said he is grateful the Katy community has supported him.

“Seeing from day one from where we started to where we are at now and the smile on people’s faces when they leave here, you know, that’s the great thing at the end of the day,” he said.