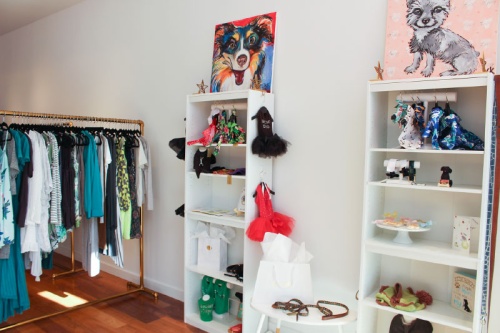 For nearly a decade, owner Carrie Ann Sanders has worked to create a place for women and their four-legged friends to shop, feel better through fashion and make a difference in the community.

Following the success of her winter pop-up shop in the Market Street shopping center in The Woodlands, Sanders hosted the grand opening of Carrie Ann Boutique on April 14. This is Sanders’ second location for the business, with the first in Houston’s Uptown neighborhood.

Sanders said after a customer from The Woodlands visited her Uptown store and suggested the area as a site for a second location, she began to take a closer look outside the Loop.

“I never really thought about going that far, and then I came out here and really liked the area,” she said. “There’s just a lot to do here, and I had been wanting to expand anyway, so it was kind of perfect timing.”

The store carries clothes for a range of women in a number of sizes, including trendier items for late teens to more corporate attire with flair for adults.

“I really wanted both a mother and daughter to be able to shop here, so I try to give a wide variety,” she said.

To stock the stores, Sanders said she visits clothing markets in Dallas throughout the year to find new fashions. Fashion lines available at the store include Tart, which feature clothing that is more comfortable and conservative, and MinkPink, an Australian based-clothing line that has been one of the most popular in the store.

“It’s not a brand you see everywhere, which is one of the reasons I wanted it,” she said.

Clothing prices range from between $40 and $200 for dresses, tops and other apparel items, Sanders said.

Customers who visit Carrie Ann will quickly notice Sanders’ love of dogs, as the store also offers a selection of pet apparel, leashes, decor and specialty treats for her shoppers’ best friends.

The store allows customers to bring their dogs, and Sanders said the store’s mascots, her dogs Oliver and Adele, are often there with her. She said making the store pet-friendly when she first opened in Houston was a unique concept at the time.

“At the time, eight or nine years ago, it was not a pet-friendly area in Houston,” Sanders said. “It was very uncommon to see dogs at a restaurant or at a store, and now it’s finally very acceptable. People love the fact that we have dogs’ and women’s apparel and they can bring their dogs. I just kind of wanted to make it a unique place where you can shop with your dog.”

In addition to offering pet items, the boutique also hosts adoption events to help match dogs in need with new homes. For the grand opening, the boutique partnered with rescue group Texas Animal Society to bring dogs to the store, something the store’s Uptown location has done for several years.

“We do at least one pet adoption [event] a year,” Sanders said. “I just love being able to help dogs and owning a store gives me an opportunity to do things like that.”

Sanders said one of the most rewarding things about her business is seeing women feel better about themselves and lifting up their mood by trying on a new color or something they would not normally wear.

“Honestly, I like helping people step out of their box—that’s my whole thing. I want women to take a chance and not be in their typical every day,” Sanders said. “I just love when women leave and they’re like, ‘Oh, my God, I would have never thought to wear this.’ I love that.”